This is a great opening track to this famous album. What a way to introduce probably the most famous album ever.

The slicing guitar stands out and the drum sound that Ringo got. Paul McCartney wrote this and sang lead. After recording it, he had the idea of doing the whole album as if Sgt. Pepper was a real band. It became the title track of what was considered a “concept” album, with the songs running seamlessly together on the record.

The title is a parody of American bands who were choosing long names for their bands.

Three days after the album came out, Jimi Hendrix opened a concert with this. McCartney and Harrison were both there, and were very impressed that Hendrix learned it so quickly. 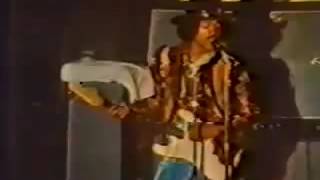 The reprise of the song is right before A Day In The Life.

This song was produced in a rush when The Beatles decided to bring back the theme song to introduce the last track on the album, “A Day In The Life.” The idea to reprise the song came from Neil Aspinall, The Beatles’ friend and road manager.

George Harrison, Paul McCartney, and Ringo Starr played this on May 19, 1979 at Eric Clapton’s wedding. Clapton married Harrison’s ex-wife, Pattie. Pattie didn’t think John Lennon would fly over from America so she never sent an invititation. John Lennon said later he would have come.

The album was heavily produced and took 129 days and about 700 hours to complete. The Beatles first album, Please Please Me, was recorded in less than 10 hours.

The crowd noise was dubbed in. The Beatles had stopped touring by then.

There really is an apostrophe in this song’s title, although on the album cover, it is rendered without. Since the Lonely Hearts Club Band belongs to Sgt. Pepper, it is possessive, thus “Sgt. Pepper’s.”

This is reprised at the end of the album before the final track, “A Day In The Life.”

This was recorded as one song with “With A Little Help From My Friends.” They flow seamlessly on the album, creating a problem for radio stations that want to play just one of the songs.

Artist Peter Blake designed the album cover as if Sgt. Pepper’s band had just performed a concert. He asked The Beatles who they wanted at the concert, and put them in the cover design.

All living people depicted on the cover were asked permission. Mae West refused at first – she didn’t want to be part of a “Lonely Hearts Club Band” – but The Beatles wrote her a letter and she agreed. Other characters depicted on the album cover include comedic duos Laurel & Hardy and Abbott & Costello, Marilyn Monroe, Shirley Temple and W.C. Field.

Lennon wanted Jesus, Gandhi, and Hitler on the cover. He had recently taken a lot of heat for saying The Beatles were “Bigger than Jesus,” so they decided not to.

It was rumored that the hand that is sticking out above Paul is that of Adolph Hitler. A Hitler cut out was on the set, but if you look at some side shots of the photo session, you can clearly see that the hand belongs to comic Issy Bonn, whose face is seen in between Paul McCartney and George Harrison.

On the cover of this album McCartney is taller than the other Beatles. This added to rumors of his death, since there is also a hand above Paul’s head which is an omen of death. Also, if you take a mirror and put the edge on the center of the Lonely Hearts Club Band drum an arrow will point directly to McCartney.

Sgt. Pepper was the first pop album to come with printed lyrics on the cover.

Twelve years after “Sgt. Pepper’s Lonely Hearts Club Band” and “With a Little Help from My Friends” appeared on the Sgt. Pepper album, they were released together as a two-song medley and reached US #71 and UK #63.

In 2005, Bob Geldof helped organize Live 8, a set of concerts held in eight countries with the goal of promoting activism. The concerts coincided with the G-8 summit, and Geldof was hoping to send a message to world leaders that they should increase aid to Africa and institute fair trade practices. On the London stage, U2 played this with McCartney to kick off the concert. The opening line, “It was 20 years ago today,” was a reference to Live Aid, which Geldof organized for famine relief in 1985.

Sgt. Pepper’s Lonely Hearts Club Band was the first rock album to win a Grammy for Album of the Year.

On the album cover, Paul McCartney is wearing an Ontario Provincial Police (OPP) badge on his right sleeve. You can see this better on the inside artwork.

In 2007, the Beatles Story museum in Liverpool went on a search for real Sgt. Peppers and found seven police or army officers in the UK that were sergeants with the last name Pepper. “Being Sgt. Pepper is awesome but sometimes people think I am bogus when I call them on the phone or introduce myself,” Sgt. Sean Pepper of Highfields said.

It was twenty years ago today
Sergeant Pepper taught the band to play,
They’ve been going in and out of style,
But they’re guaranteed to raise the smile,
So may I introduce to you,
The act you’ve known for all these years,
Sergeant Pepper’s Lonely Hearts Club Band.

I don’t really want to stop the show,
But I thought you might like to know,
That the singer’s going to sing a song
And he wants you all to sing along,
So let me introduce to you
The one and only Billy Shears
And Sergeant Pepper’s Lonely Hearts Club Band