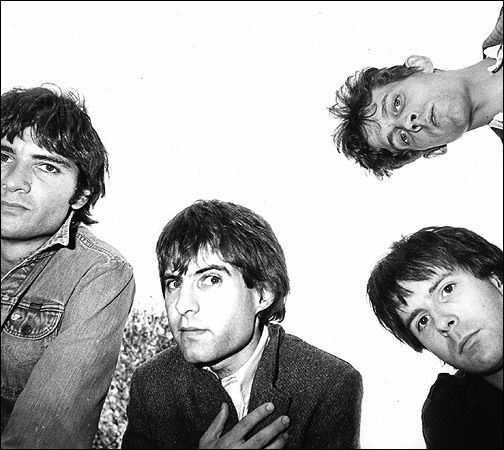 The Db’s were a great unknown power pop band…who would influence many bands but not sale many records. The band members were Peter Holsapple, Chris Stamey, Will Rigby, and Gene Holder.

All of the members are all from Winston-Salem, North Carolina, but the band was formed in New York City in 1978. They never broke through to the masses but they were heard on college radio in the 80s.

“Black and White,” is the leadoff track to The dB’s debut album Stands for Decibels, and it is pure power pop. The dB’s were signed to the U.K. label Albion, which had trouble licensing the record for American distribution…. and subsequently went un-promoted in radio and only received sporadic play from college radio stations.

The Stands for Decibels album was ranked at number 76 on Pitchfork‘s list of the 100 best albums of the 1980s. The dB’s would released 6 albums in all. The last album was released in 2012 when the members reunited.

The dB’s broke up in 1988 and Peter Holsapple would go on to be an auxiliary guitarist and keyboardist for REM on the Green tour. He then helped in writing and recording their Out Of Time album. Holsapple subsequently worked with Hootie & the Blowfish as an auxiliary musician.

The dB’s worth checking out.

In May of 1978 two members of the dB’s Will Rigby, Peter Holsapple, and future R.E.M producer Mitch Easter made a pilgrimage to Memphis. They were about the only people in America who, while attending high school in the early ’70s, were under the impression that Big Star was a major band.

Their first stop was Danver’s…a restaurant that former Big Star’s Chris Bell worked at and his father owned. They passed a note to the server to talk to Chris and out he came. He was shocked that fans would track him down. It had been 6 years since the Big Star debut album was released.  They were impressed by how nice he was to them.

Bell invited them to join him after work at a ferny bar-café called the Bombay Bicycle Club. Here, while Bell played backgammon with a buddy, the three guys peppered him with questions: What kind of guitar did he play? How did he get those great sounds?

Bell wondered if the boys were up for maybe checking out a Horslips (local rock band) concert. They instead decided to go over to Sam Phillips Recording Service to visit Alex Chilton, Bell’s former Big Star bandmate, then making his experimental album Like Flies on Sherbert. Bell and Chilton exchanged quiet hellos before Bell went home.

A few days later Alex Chilton drove Easter and Rigby (Holsapple had already left) around Memphis, showing them the old Sun Studios building (which had a Corvair parked inside it), and taking them up a bluff overlooking the Mississippi. He pulled out a cassette and played a song on a junky little cassette player that took his visitors by surprise.

Chilton played the guys a Chris Bell song. He was raving about it saying it was Chris’s best song and it was the ultimate “Big Star song “…the song was I Am The Cosmos which the public had not heard at this point.

Chris Bell would die in a car wreck on Decemeber 27, 1978…only 7 months after this happened.

Chris Stamey on Big Star:“They were my favorite, and as far as I knew they were popular all the way across America. At least for that moment, I forgot about Emerson, Lake, and Palmer.”

Peter Holsapple on meeting Chris Bell and I Am The Cosmos:  “that the person who made all that beautiful music was a right-on kind of guy, too.” “It’s that kind of rife-with-sadness record, but it’s realized with the same imploding beauty that Big Star had. I mean, I Am the Cosmos-it’s just wry enough to make you turn your head and do a double-take, you know, the first sixteen thousand times you listen to it.”

Love
Love is the answer
To no question
But thanks for
Oh, the suggestion
I know I don’t care at all
Yeah, I know I don’t know anything at all
But I stop