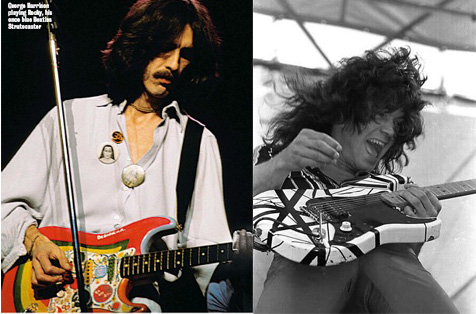 Lets continue browsing through famous guitars. In Part 1 we had a guitars owned by Brian May and Willie Nelson.

Today we will start off with one of my favorite guitars for obvious reasons…and then Frankenstrat below Rocky.

When The Beatles were in the studio recording “Help!“, John Lennon and George Harrison sent roadie Mal Evans out to go get a couple of Fender Stratocasters.   Evans came back with matching 1962 Sonic Blue Strats. You can hear both of these guitars on Rubber Soul…especially both playing the solo on Nowhere Man in unison.

George Harrison: “During ’67, everybody started painting everything,” “and I decided to paint it. I got some Day-Glo paint, which was quite a new invention in them days, and just sat up late one night and did it.”

Harrison used some of his ex-wife Patti Boyd’s nail polish to paint the headstock. George played the guitar that year in the Beatles’ live performance of “All You Need Is Love” on the around the world satellite feed called Our World, the first global satellite TV program, and in the film Magical Mystery Tour, in the segment where the Beatles mime to “I Am the Walrus”

In 1969-1970 on the advice of the great slide guitar player Ry Cooder George set Rocky up for slide only.

Following its announcement at NAMM 2020, Fender has now officially released its faithful recreation of George Harrison’s ‘Rocky’ Stratocaster…hmm I know exactly what I want for Christmas!

Eddie wanted to make a guitar that was a cross of a Gibson and Fender. To have the clean tone of a Fender and the ability to have the crunch of a Gibson.

In 1974 he visited Boogie Bodies guitars, whose parts were used on early Charvels, and bought himself a factory second unfinished body and neck, paying total of $130. The body he bought was the first one he saw laying around in the store, but he paid close attention to choosing the right neck – he looked for a wide neck with a really thin profile and big Gibson-style frets.

He painted the body black and wrapped masking tape around it and repainted the body white.  He installed a  Fender tremolo from a 1958 Stratocaster, Schaller tuners, and a Gibson PAF pickup from an old ES-335 which he dipped into paraffin wax in order to get rid of the feedback.

He played the guitar on Van Halen’s first album, and during the band’s first tour. Towards the end of the tour, the guitar was changed to feature a white pickguard and a rosewood neck.

He later changed out necks and hardware and painted it red with bicycle paint.