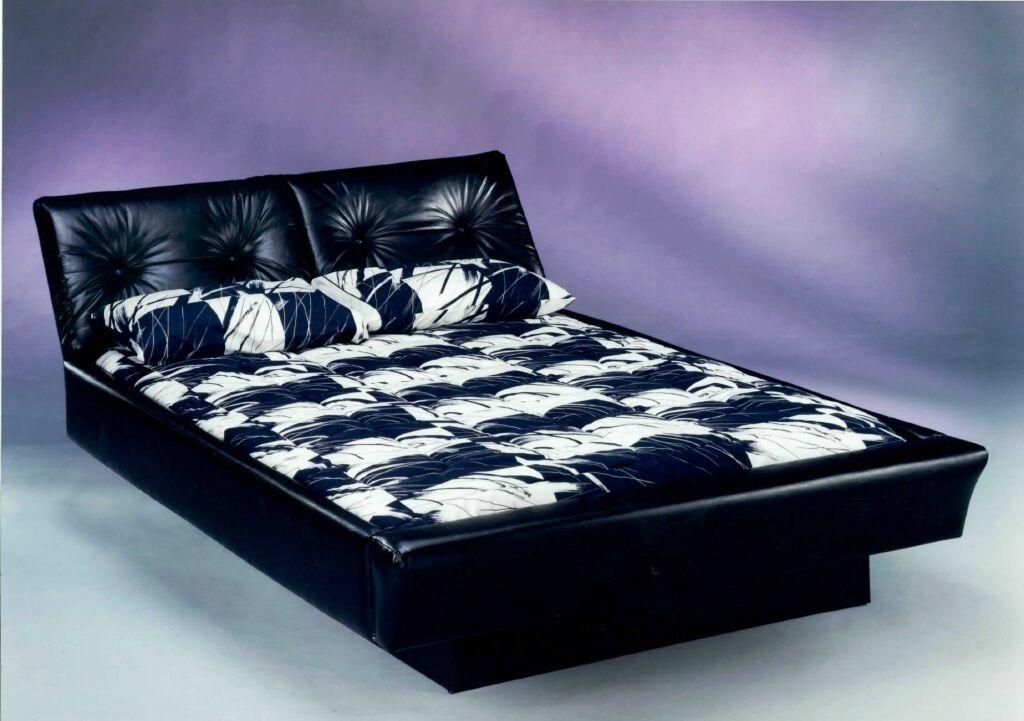 I had a waterbed in the early 80s as a young teen. I always liked it and thought it was comfortable. Two things I didn’t like about it was… if there was a leak you would not know until 2:30 am and on a school night…always. If the heater was either turned down or went out…you would wake up as a human popsicle at…you guessed it… 2:30 am. Nothing ever happened to it at noon on a Saturday.

In 1873, Sir James Paget, of St. Bartholomew Hospital in London, presented the waterbed designed by Dr. Arnott as a treatment and prevention of ulcers, a common condition at this time. Paget found that waterbeds allowed for even pressure distribution over the entire body. The only problem was that you could not regulate the water temperature.

In 1968 Charles Hall presented the waterbed as his Master’s Thesis project to his San Francisco State University design class. While showcasing their work, students rotated through workshops to see each other’s inventions. Once they reached Hall’s project – a vinyl mattress filled with heated water – the class never left. “Everybody just ended up frolicking on the waterbed,” Hall recalls.

Hall’s first waterbed mattress was called ‘the Pleasure Pit’ and it quickly gained popularity with the hippie culture of the 1960’s and 1970’s.

Time Magazine in 1971 about waterbeds. “Playboy Tycoon Hugh Hefner has one–king-size, of course, and covered with Tasmanian opossum. The growing number of manufacturers and distributors, with such appropriate names as Aquarius Products, the Water Works, Innerspace Environments, Joyapeutic Aqua Beds and the Wet Dream, can hardly meet the demand. They have sold more than 15,000 since August.”

Sex always sells… one ad stated. “Two things are better on a waterbed. One of them is sleep.” and “She’ll admire you for your car, she’ll respect you for your position, but she’ll love you for your waterbed.” 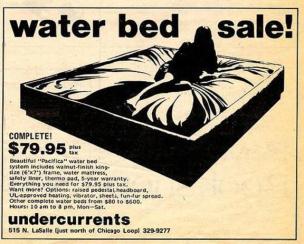 By the 80s waterbeds were in the suburbs and gaining in popularity. In 1987, waterbeds had achieved their peak, representing 22 percent of all U.S. mattress sales.

At the end of the 1980s waterbed sales fell off. Some say it was because they were too connected to the 70s that had fallen out of favor (the horror!)… but most think it was because of the maintenance and pain in setting them up and moving them. Also, you had to make sure your floor was braced enough to have one depending on the size and weight of it.

Today you can still buy them but most are designed thinner to hold less water in rolls instead of sleeping on a lake beneath you.

I had mine until I was 20 with plenty of patches but it still held water and me… but I left it behind when I moved.

This egg-shaped one below I would gladly take home now

COME NOW! TO THE WATERBED WAREHOUSE!

Keith Moon talks about a waterbed

16 thoughts on “When Waterbeds were cool”