When I was growing up this was a must-watch in October. It’s The Great Pumpkin, Charlie Brown was first released in October 1966.

Charlie Brown is invited to Violet’s Halloween party. Before the party, the Peanuts gang plan to go trick or treating, with Snoopy, who is dressed as the WWI flying ace, taking his Halloween disguise to an extreme. The one person who won’t be joining them for the trick or treating or the party is Linus, who will be waiting in his local pumpkin patch for the arrival of the Great Pumpkin to give toys and candy to all the girls and boys.

This year he talked Sally, Charlie Brown’s sister, into coming with him while the others went out. Linus and Sally stays at the pumpkin patch all night until Lucy gets up in the middle of the night to take Linus back home. The next day, Charlie Brown and Linus about the night’s events. Charlie Brown assures Linus that he’s done his share of stupid things too. This upsets Linus, who vows that the Great Pumpkin will appear next year.

It’s The Great Pumpkin Charlie Brown was adapted from Schulz’s newspaper strip, which he had conceived as a metaphor for some of the hope and disappointment associated with Santa Clause. Schulz didn’t like the idea of kids getting their hopes up about a lot of presents when many families could only afford one or two gifts for the holidays. “The Great Pumpkin is really kind of a satire on Santa Claus, when he doesn’t come, Linus is crushed.”

Growing up, there was no other cartoon I looked forward to more than The Peanuts. Every holiday I was there watching the gang. I would also read the  Sunday paper to see the Peanuts strip.

Everything from Linus telling us the true meaning of Christmas, Sally and Linus waiting for the Great Pumpkin, Lucy pulling that football from Charlie Brown, Snoopy being WWI flying ace, Lucy being a Psychiatrist, and Charlie Brown getting that sad-looking Christmas tree…we got to peek into that kids only world and listen to the wisdom that was going on while Linus and Charlie Brown discussed life. 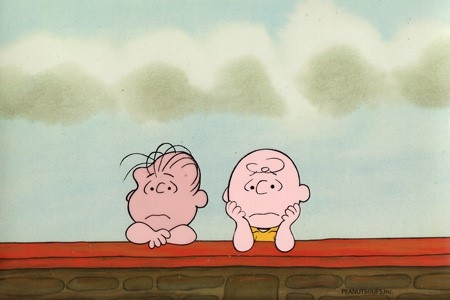 The Peanuts taught us about life. We lose more than we win therefore everyone is Charlie Brown to an extent. Every person has failed at a big moment or many of the small ones. We felt for Charlie Brown because we could relate.

The Peanuts lived in a world where adults didn’t matter as much. The world was for kids only and anytime an adult came around and talked… all you heard was a wah, wah, wah wah… no words. All the kids owned their day to day activities. The Peanuts didn’t talk down to us…no they talked to us. They were also clever enough for adults to like.

Nobody ever wins every time in this life. Everyone loses sometimes…therefore everyone is Charlie Brown to an extent. Every person has failed at a big moments or at small moments. We felt for Charlie Brown because we felt for ourselves.

When my son was born…I thought oh great…Now I’m a grown up and I’m a wah, wah, wah, wah adult…My son will live his life and sometimes I will be just noise in the background.

Growing up, there was no other cartoon I looked forward to more than the Peanuts. Every holiday and any time one of the networks decided to show one… I was there. I would also read the occasional Sunday paper to see the Peanuts strip.

Everything from Linus telling us the true meaning of Christmas, Sally and Linus waiting for the Great Pumpkin, Lucy pulling that football from Charlie Brown, Snoopy being cool and taking care of Woodstock, Lucy being a Psychiatrist and Charlie Brown getting that sad looking Christmas tree…we got to peek into that world and listen to the wisdom that was going on while propped up on that brick wall.

Charlie Brown, one day when you grow up… I hope you end up with the little red head girl that you like so much and win just for once…for all of us. 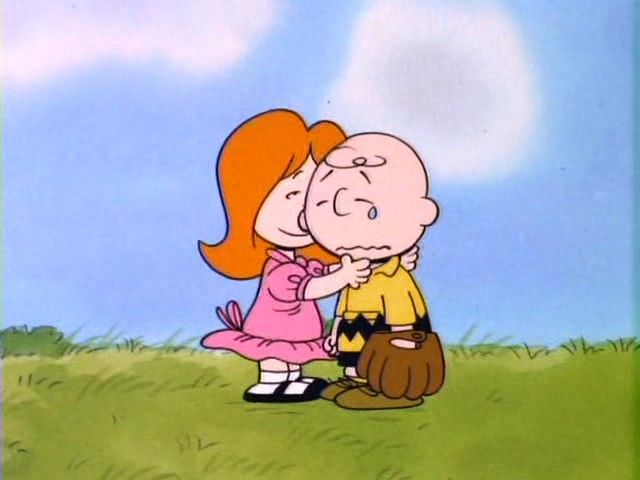 The Peanuts were my favorite cartoon growing up and I would never miss their Thanksgiving, Halloween, and Christmas specials. Everyone can relate to Charlie Brown because we lose more than we win in life. He doesn’t get to kick that football, his dog has more things than he does and he is forever trying to get the elusive little redhead girl to notice him.

The Peanuts inhabit a kid’s world where grownups are felt but not heard. At least not in English.

This first premiered on November 20, 1973, on CBS and won an Emmy Award. Great Thanksgiving special as always with the earlier Peanuts.

The Halloween, Thanksgiving, and Christmas Peanuts specials I always looked forward to. The way their world was only for kids where grownups were heard but only as noise in the background.

It starts off with Lucy tempting Charlie Brown with that football. Just one time I wanted to see Charlie kick the football…or Lucy at times.

It’s Thanksgiving and Peppermint Patty invites herself and Marcie over to Charlie Brown’s house but Charlie and Sally are ready to go to their grandmothers. Charlie talks to Linus and he suggests having two Thanksgiving dinners.

The only thing Charlie can come up with is feeding his friends toast and cold cereal which does not make Peppermint Patty happy whatsoever. She lets Charlie have it bad until Marcie remind her that she invited herself over.

Not going to give it away for those who have not seen this wonderful holiday cartoon. The music by Vince Guaraldi is excellent and makes every Peanuts cartoon special.