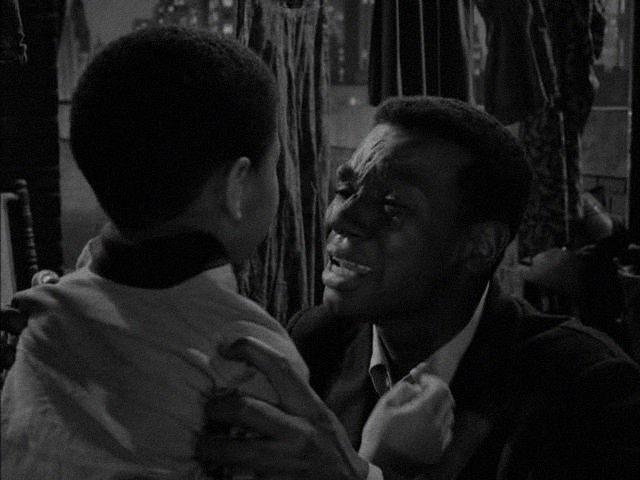 This was an important episode regardless of the story. It’s well documented that Rod Serling was against bigotry. He not only talked the talk, he put it into action with this episode with a nearly all black cast. After the airing of this episode, which was revolutionary for American television, The Twilight Zone was awarded the 1961 Unity Award for Outstanding Contributions to Better Race Relations.

It is a good episode. A child that believes in magic and a jaded boxer who long ago lost his belief. It explores the innocence in children and what little is left in adults.

The child tries to make the aging jaded boxer Bolie believe in the magic of wishing but Bolie just cannot do it. In the world Bolie lives in, wishing and hoping for the hardships to end, is never going to happen. The only real choice is to struggle through each day and fight if necessary when things block your path. The ending of this one surprised me.

In this corner of the universe, a prizefighter named Bolie Jackson, 183 pounds and an hour and a half away from a comeback at St. Nick’s Arena. Mr. Bolie Jackson, who, by the standards of his profession is an aging, over-the-hill relic of what was, and who now sees a reflection of a man who has left too many pieces of his youth in too many stadiums for too many years before too many screaming people. Mr. Bolie Jackson, who might do well to look for some gentle magic in the hard-surfaced glass that stares back at him.

Bolie Jackson is a professional boxer whose best years are behind him. He’s well-liked in his neighborhood and adored by Henry, a young lad who lives next door. He hurts his hand in an altercation with sleazy boxing manager and as a result is badly beaten in a televised boxing match. He’s apparently down and out for the count but young Henry has a special ability – something his mother calls the big wish – that changes the outcome of the match. When Bolie learns what he’s done he refuses to believe in what Henry’s done with the inevitable consequences

Mr. Bolie Jackson, 183 pounds, who left a second chance lying in a heap on a rosin-spattered canvas at St. Nick’s Arena. Mr. Bolie Jackson, who shares the most common ailment of all men, the strange and perverse disinclination to believe in a miracle, the kind of miracle to come from the mind of a little boy, perhaps only to be found in the Twilight Zone.