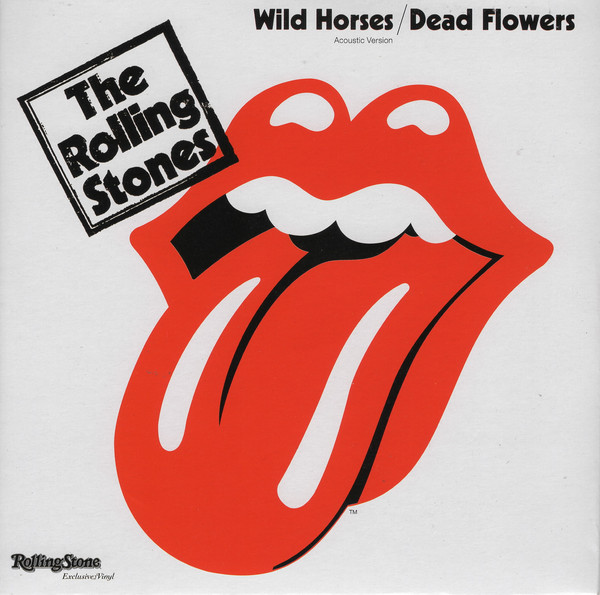 This was first released by Gram Parsons’ Flying Burrito Brothers in 1970. The Stones’ version was written in 1969, but had to wait for Sticky Fingers in 1971.

Wild Horses was said to be started as a song for Keith Richards’ newborn son Marlon. It was 1969 and Keith regretted that he had to leave his son to go on tour.

Mick Jagger’s girlfriend at the time, the singer Marianne Faithfull, claims “Wild horses couldn’t drag me away” was the first thing she said to Mick after she pulled out of a drug-induced coma in 1969. Jagger rewrote Keith’s lyrics, keeping only the line “Wild horses couldn’t drag me away.” His rewrite was based on his relationship with Marianne Faithfull, which was disintegrating.

The Stones recorded this during a three-day session at Muscle Shoals Sound Studios in Alabama from December 2-4, 1969. It was the last of three songs done at these sessions, after “Brown Sugar” and “You Gotta Move.” Jim Dickinson played piano on this song. The Stones regular pianist Ian Stewart didn’t want to play it because he hated playing minor chords.

Jim Dickinson went on to be a producer with Aretha Franklin, Big Star and the Replacements, and did a lot of movie soundtrack music with Ry Cooder.

The song was on what is arguably their best album in Sticky Fingers. One year prior to its release on Sticky Fingers, Gram Parsons convinced Jagger and Richards to allow him to record “Wild Horses” with his band The Flying Burrito Brothers. He had become good friends with Richards and helped with the arrangement of “Country Honk” as it appeared on the album Let It Bleed. The song was included on the album Burrito Deluxe released in 1970.

Keith Richards: “‘Wild Horses’ almost wrote itself. It was really a lot to do with, once again, f—ing around with the tunings. I found these chords, especially doing it on a twelve-string to start with, which gave the song this character and sound. There’s a certain forlornness that can come out of a twelve-string. I started off, I think, on a regular six-string open E, and it sounded very nice, but sometimes you just get these ideas. What if I open tuned a twelve-string? All it meant was translate what Mississippi Fred McDowell was doing – twelve-string slide – into five-string mode, which meant a ten-string guitar.”

Regarding “Wild Horses,” he said it was “a logical combination between their music and our music. It’s something that Mick Jagger can accept, and it’s something I can accept. And my way of doing it is not necessarily where it’s at, but it’s certainly the way I feel it.” (Quotes from Bud Scoppa’s liner notes in the Sacred Hearts and Fallen Angels collection.)

There are other theories as to Mick’s muse for this song, however. Jagger’s longtime girlfriend Jerry Hall in The Observer Magazine April 29, 2007, said: “‘Wild Horses’ is my favorite Stones song. It’s so beautiful. I don’t mind that it was written for Bianca.” (Not likely, since Jagger didn’t meet his future wife Bianca until 1970, which was after the song was recorded.)

Muscle Shoals Sound Studios (actually located in Sheffield, Alabama) opened in May 1969 when Jerry Wexler at Atlantic Records (The Stones’ label) loaned money to four of the musicians at nearby FAME studios so they could start their own company and install 8-track recording equipment (FAME was on 4-track). Wexler sent many of Atlantic’s acts to Muscle Shoals, since the musicians were fantastic and it was a dry county with nothing to do, which meant the artists were more likely to stay focused. The studio also had a distinctive sound that can be heard on this track, especially on Jagger’s vocals – you can hear a slight distortion that was caused by the console.

When The Stones left the Shoals, they headed for Altamont, California, where they gave a free concert on December 6, 1969 – a disastrous show where a fan was stabbed to death by a Hells Angels security guard. In the documentary Gimme Shelter, which chronicles the concert, there is a scene where the band is listening to playback on “Wild Horses” at Muscle Shoals Sound.

The Sticky Fingers album had very elaborate packaging. Designed by Andy Warhol, the cover photo was a close up of a man’s jeans with a real zipper on it. It was also the first time the tongue logo was used.

Stones guitarist Mick Taylor played acoustic guitar on this song in what’s known as “Nashville tuning,” in which you use all first and second strings and you tune them in octaves.

The Chinese rock star Cui Jian sang this with Mick Jagger when The Rolling Stones played a concert in Shanghai on April 8, 2006. Jian was supposed to open for The Stones in 2003, but their Chinese tour was canceled because of S.A.R.S.

The Sundays covered this song. Their version appears on the soundtrack to Buffy The Vampire Slayer.

To coincide with the release of Britain’s Got Talent star Susan Boyle’s cover of this song, Universal/Polydor re-released The Rolling Stones’ original as part of a special digital bundle featuring three versions of the track. The other two being a recording backstage during the band’s Voodoo Lounge tour in 1995, which was included on the Stripped live album and a video of a live performance of the song recorded at Knebworth in 1976.

I watched you suffer a dull aching pain
Now you’ve decided to show me the same
No sweeping exit or offstage lines
Could make me feel bitter or treat you unkind
Wild horses couldn’t drag me away
Wild, wild horses couldn’t drag me away
I know I’ve dreamed you a sin and a lie
I have my freedom but I don’t have much time
Faith has been broken tears must be cried
Let’s do some living after we die