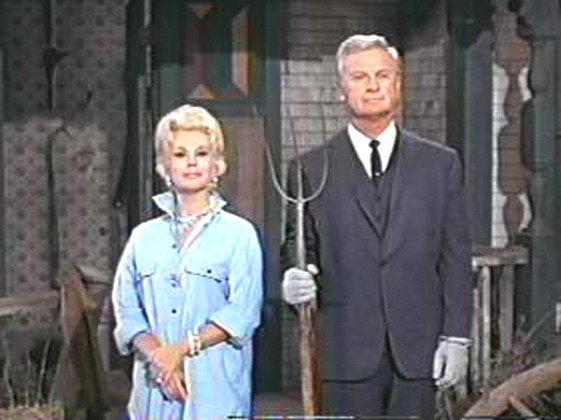 One of the most surreal shows to ever be on television.

I was too young to catch this show when it was on originally. I never thought too much of it but I started to watch it later on in life. At first look, it looked like a rural show with country humor….wrong wrong wrong. Yes, it was wacky but it broke through the 4th wall… You can see it’s influenced in the Simpsons and more shows. Poor Oliver was surrounded by crazy people and the craziness infected him at times. The show takes place in the fictional town of Hooterville…they never reveal the state but it doesn’t matter. The characters of this show were classic.

It’s really hard to describe this show. It was intertwined with 2 other shows…The Beverly Hillbillies and Petticoat Junction…BUT it’s nothing like those other two. Not in the same zip code or planet. Basically…a New York Lawyer with his rather ditsy socialite wife moves to the country. He bought…or got conned into buying a broken down farmhouse (The Haney Place?) with his dreams of being a farmer. I will say the first few episodes kinda follows a normal sitcom template but then it gets really surreal. This is one show that would work today with no problem.

Mr. Haney – Probably the biggest con-man in television history. He will stop at nothing to make a buck and he finds a sucker in Oliver many times.

Eb – The somewhat slow farmhand that calls Oliver and Lisa mom and dad much to Oliver’s annoyance. He asks for everything but gets out of work as much as he can…plus he tells Oliver what a bad farmer he is….

Mr. Drucker – out of all the residents of Hooterville  he is at times the most normal of the crazy lot…but that is not saying much. He operates the general store, post office, the newspaper and is the the notary public. I’m sure I’m missing something else.

Fred and Doris Ziffel – Fred and his long suffering wife Doris. They have no children so they raise a pig named Arnold as a child. He goes to school and does every kids do.

Arnold – The pig which is probably the character best remembered to the public.

Hank Kimball – My favorite character hands down…you talk about short term memory…this guy has it. He is the county agent and helps…or something like that Oliver with his farm.

Ralph and Alf Monroe – Two inept carpenters that are brother and sister and the sister’s name is Ralph. They work on Lisa’s and Oliver’s bedroom the entire show’s run and never gets it done.

Oliver and Lisa Douglas – It’s a wonder that the show didn’t end up with Oliver in an insane asylum after dealing with everyone in Hooterville. Lisa, as the show goes along starts think and act like the Hooterville residents. Lisa is a terrible cook to say the least that specializes in hot cakes…that are used to seal cracks and as a head gasket and she cooks a great hot water soup.

Eleanor – Oliver’s and Lisa’s cow. About the only good deal they ever got from Mr. Haney.

Some more info on Green acres.