It’s gone past simple holograms…they are now avatars (the ABBA reunion). For the sake of this post… I’ll call them holograms. This post is basically me arguing with myself and wanting some input.

I’ve thought about the subject of the dead rock star hologram tours off and on. I apologize for putting it so bluntly but that is what it is. Something in me just tells me there is something inherently wrong about this. So I hate to ask myself this…but would I want to go to a Jimi Hendrix show playing near me? Uh…yes I would and I feel bad about saying that. I would probably go and then hate the decision later. How could they capture Jimi Hendrix? I don’t see how someone could capture a performer like him…who was different every time he played.

I was surprised at my answer that I would even go. On the other hand, we have laser shows with bands’ music…so what is the big difference? We also have duets with Paul McCartney singing with John Lennon right now on Paul’s tour. When I saw The Who, there was Keith Moon singing “Bell Boy” in a film from a concert in the 70s while the current Who was playing. I also got to see Beatlemania with artists dressed up as The Beatles…somewhat different than this but is it really?

It’s something that I think will happen in the near future for different stars no matter if we like it or not. Holograms have been around for a while. In 1977 The Who presented a promotional event just for their fans with this Keith Moon hologram (with the real Keith Moon in attendance) and in another event in 2009…obviously without the real Keith in attendance. 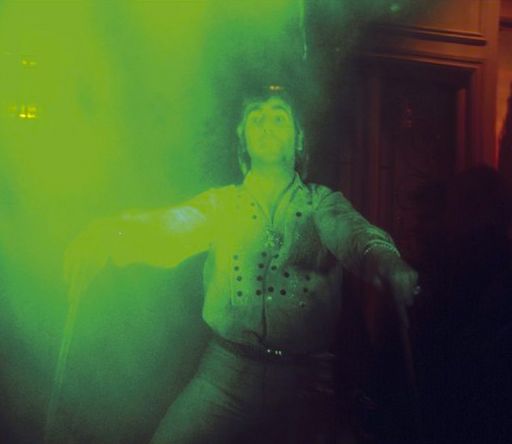 Keith is near the end of his life in this version…you can tell it’s older with the greenwash all around. The big difference is now …the holograms sing, move, and play their instruments or rather they appear to do that. There have been shows now built around Buddy Holly, Roy Orbison, Elvis, Ronnie James Dio, ABBA (who are very much alive),  Whitney Houston, Tupac, Billie Holiday, Wilson Pickett, and more.

The families are in control now and will decide. I’ll ask myself again…would I want to see the Hamburg or Cavern Beatles? The 1972 Rolling Stones? the 1969 Who? The 1950’s Elvis? AC/DC with Bon Scott? 1970 Janis Joplin? The Doors?

Yes to all the questions I asked but…I’m not sure how I would feel.

What do you think? Would it be unsettling to see a long-gone performer in their prime again a few feet from you? Would you go see a show (not really a concert) of your favorite deceased performer?

Now, on the other hand, there is another angle. If Bob Dylan, who is very much alive, would announce tomorrow that a 1966 version of himself was going on tour…would I go? Oh yes, I would and I would not feel bad at all. ABBA just did this also. So why do I think I would feel different about seeing Jimi, Lennon, Janis, or someone else that has long been gone?

Before you answer…now, current bands can play in Washington and be projected as holograms in London simultaneously…so it’s taken a huge jump. See the bottom video. No traveling in stuffy vans….just play at your local pizza joint and be somewhere else also. So our band could play in my garage and be on stage at Carnegie Hall and interact with the audience. I have to wonder how far it will go?