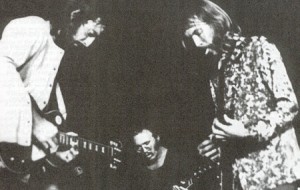 Damn…this is such a great song. Duane Allman came into the Derek and the Dominos sessions and made a suggestion to record a Jimi Hendrix song, Little Wing. This is what he did in the Wilson Pickett sessions with the song Hey Jude.

After the Layla sessions were completed, Clapton returned to England with a rare left-handed Fender Stratocaster, a gift for Jimi Hendrix. He wanted him to hear the Dominos’ recording of Hendrix’s Little Wing, a tribute he and Duane had recorded for him. They both greatly admired Hendrix and Duane planned to meet him when Jimi came back from Europe. On the morning of September 18, 1970, Jimi Hendrix was found unconscious in a Notting Hill apartment in London. He died that afternoon at the hospital, having apparently suffocated while under the heavy sedation of sleeping pills.

The album peaked at #16 in 1970 on the Billboard 100. Although Derek and the Dominos were poised to record a follow-up album in 1971… tensions and drug abuse among the band members, along with the tragic death of Duane Allman ended that idea.

Jimi wrote this song and it was inspired by the 1967 Monterey Pop Festival, a concert held for 3 days in 1967. It was attended by around 200,000 music fans, it happened 2 years before Woodstock. Jimi wrote about the atmosphere at the festival as if it was a girl. He described the feeling as “Everybody really flying and in a nice mood.” He named it “Little Wing” because he thought it could just fly away.

Bobby Whitlock keyboard player: We had two leaders then. We had Eric and Duane. Eric backed up and gave Duane a lot of latitude, a lot of room, so he could contribute up to his full potentiality, and Duane was full of fire and ideas. He’d just go, “Hey, how about we try ‘Little Wing’?”—that was completely his idea and he came up with the intro by himself. He just started playing it.

Duane was very, very good in the studio. Working with the finest musicians and engineers on the planet really paid off for him. When he had the opportunity to be thrust into that environment, he absorbed what was right and righteous and then used it to killer advantage.

Well, she’s walking through the clouds
With a circus mind that’s running around
Butterflies and zebras and fairy tales
That’s all she ever thinks about

And when I’m sad, she comes to me
A thousand smiles she gives to me free
Said it’s all right, take anything you want from me
(Anything you want, babe) (Anything)

Well, she’s walking through the clouds
With a circus mind that’s running around
Butterflies and zebras and fairy tales
That’s all she ever thinks about

And when I’m sad, she comes to me
With a thousand smiles she gives to me free
Said it’s all right, take anything you want from me, baby
(Anything you want) (Anything)

22 thoughts on “Derek and the Dominos – Little Wing”