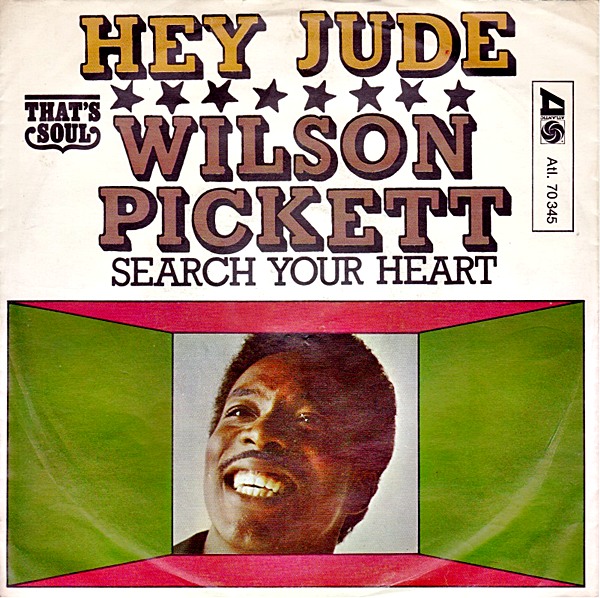 It’s rare that I post a cover of a Beatles song but this one is worth it. This song was a groundbreaker in the world of R&B and Soul because of the song selection and Duane Allman. This is a great performance of a great song. For me, it’s up there with Joe Cockers With A Little Help from My Friends as one of the best Beatle cover versions.

Duane Allman was working at Muscle Shoals playing on records in 1968. He played on some Clarence Carter records and then in walked Wilson Pickett. The problem was they had no song for Pickett to sing at the booked sessions. Duane Allman brought up Hey Jude to cover in front of Pickett and Rick Hall the producer.

Wilson Pickett and Rick Hall said no they didn’t want to cover the song. Hall and Pickett had objections that the song was currently moving up the charts and  the length of the song made getting it played on the radio almost impossible if you were not the Beatles,

Rick Hall told Allman that it didn’t make sense…the Beatles were the biggest band in the world and their version was clearly going to number 1. He told Allman it would be crazy to do it. Allman shook his head and said no it wouldn’t be crazy. Yes, he said the Beatles are the biggest band in the world and yes it will hit number 1 but that is the reason we should do it. He said just think of the attention we will get having a black artist cover this new Beatle song. Hall thought about it and soon agreed with Allman.

Rick Hall: ‘Their single’s gonna be number one. I mean, this is the biggest group in the world! And Duane said, ‘That’s exactly why we should do it — because [the Beatles single] will be Number one and they’re so big. The fact that we would cut the song with a black artist will get so much attention, it’ll be an automatic smash.’ That made all the sense in the world to me. So I said, ‘Well, okay. Let’s do it.’”

Pickett was not as easy to persuade.  Allman was firm but gentle with Pickett and finally, Wilson relented and he recorded it. It turned out to be an R&B classic. The head-turner was when Pickett started to scream and in came this electric slide guitar of Allman. At that point, you didn’t hear much electric slide on records outside of the blues. After this record, R&B and soul producers started to bring in more rock guitars to compliment what they had.

This record changed Allman’s career in ways he couldn’t have known. One of Duane’s guitar heroes heard this version and called Atlantic records (Wilson’s record label) and asked who is that guitar player? I want to know now. That guitar player who asked was Eric Clapton.

Later when Clapton was recording the Layla and Other Assorted Love Songs album his producer Tom Dowd asked him if he would mind if Duane Allman dropped by and watch him play. Clapton turned and confirmed that Allman was the guitar player on Pickett’s Hey Jude and when Dowd said yes…Clapton said yes tell him to come by because I want to see HIM play. Allman would end up playing and contributing to most of the Layla album.

The song peaked at #23 in the Billboard 100 and #13 in the R&B Charts in 1969. The rhythm guitar player in Muscle Shoals Jimmy Johnson later credited Allman’s performance on Wilson Pickett’s album Hey Jude as the beginning of Southern Rock. This was recorded a few months before the Allman Brothers formed.

Wilson Pickett: “He stood right in front of me, as though he was playing every note I was singing, and he was watching me as I sang, and as I screamed, he was screaming with his guitar.”

As a Beatle fan…the ironic thing about this song is that George and Paul got into a big disagreement with the Beatle version. George wanted to add guitar fills in between lines to echo them…that is what Duane Allman did in this version.

Hey Jude, don’t be afraid
You were made to go out and get her
The minute you let her under your skin,
Then you begin to make it better

And anytime you feel the pain, hey Jude, refrain,
Don’t carry the world upon your shoulders
For well you know that it’s a fool who plays it cool
By making his world a little colder

Hey Jude, don’t let me down
You have found her, now go and get her
Remember to let her into your heart,
Then you can start to make it better

So let it out and let it in, hey Jude, begin
You’re waiting for someone to perform with
And don’t you know that it’s just you, hey Jude, you’ll do
The movement you need is on your shoulder