If you want to see where we are…HERE is a list of the episodes. (I have cleaned the page up)

This is one of the two Twilight Zones that William Shatner appeared in. In this one we never know if any thing supernatural is happening or not. It plays on people’s superstitions and beliefs. William Shatner’s character Don Carter is superstitious and comes with a four leaf clover and rabbits foot. That quietly sets up the episode.  Although the answers are extremely general, he soon becomes convinced that the machine has correctly predicted two events: his promotion to office manager and a close call he and Pat have while crossing the street.

The couple has to make a decision, will they let the machine decide their destiny or will they try to make it on their own? Both Shatner and Patricia Breslin play this well…although especially Shatner. I never think of him as a great actor but he hits this one out of the park.  It’s not just Don that has trouble getting past this possible mystical machine…more believing customers are on their way.

It took me a few viewings to appreciate this episode as much as I do. It works on a Twilight Zone level and beyond that. This one could have easily been on Hitchcock. The suspense builds through out the episode because Shatner and Breslin’s chemistry.

In fact Richard Matheson, said that he wished that Pat Breslin (who played Pat Carter) had been available again to play the wife of Shatner’s character in the season five episode “Nightmare at 20,000 Feet.” That would have been great as the couple would have continued their story.

The Magic 8 Ball comes to mind that were popular in the seventies and even now. 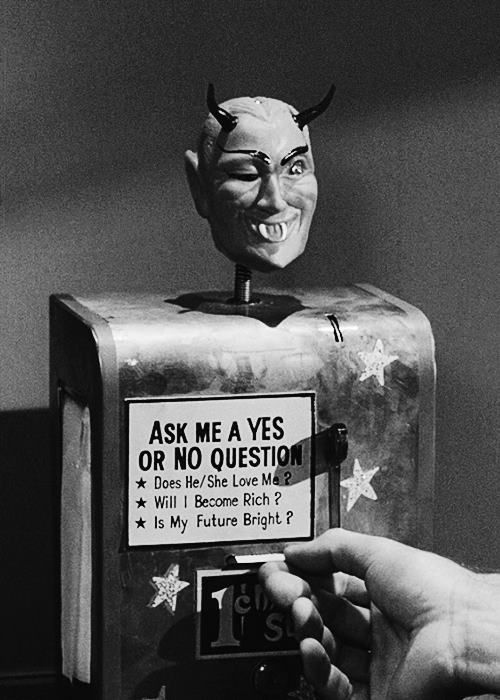 This show was written by Richard Matheson and Rod Serling

The hand belongs to Mr. Don S. Carter, male member of a honeymoon team on route across the Ohio countryside to New York City. In one moment, they will be subjected to a gift most humans never receive in a lifetime. For one penny, they will be able to look into the future. The time is now, the place is a little diner in Ridgeview, Ohio, and what this young couple doesn’t realize is that this town happens to lie on the outskirts of the Twilight Zone.

Don and Pat Carter are on their honeymoon when their car breaks down in the small town of Ridgeview, Ohio. They have a few hours to spare while their car is being repaired and spend time in the diner. There they find a fortune-telling machine, a game where you can ask a question and for a penny will spit out an innocuous answer. When the machine apparently begins to predict events – Don’s promotion at work, a near accident on the street outside – a superstitious Don becomes infatuated with the device threatening his marriage and his future with Pat.