A song that takes me back to being a kid riding in my sister’s Vega…she kept a case of oil in the hatchback because it used it daily…but the AM radio worked great.

A great song written by the super talented Toy Caldwell. This is the Marshall Tucker Band’s biggest hit on the Pop charts, and remains their best-remembered song.

Toy Caldwell was the soul of that band. He was a Marine in the 60s and served in Vietnam. After getting injured he was able to go home and started to play music with his high school friends. Toy and his brother helped start Marshall Tucker.

Toy stayed with Marshall Tucker until he left in 1984. Contributing to him leaving was the fact that his brother… co-founder of the band and bass guitarist Tommy Caldwell, was killed at age 30 in an automobile accident on April 28, 1980. Toy’s other brother Tim Caldwell, who on March 28, 1980, one month prior to Tommy’s death, was killed at age 25 in a collision in South Carolina. 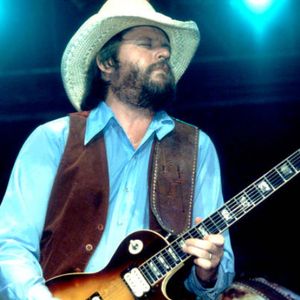 In spite of its up tempo, it’s rather sad. Written by Toy Caldwell, the song is about a man who has lived on the road from town to town and affair to affair. Here, he’s been with a woman who’s been good to him and who he actually loves, but he can’t stay with her because the call of the road is too strong.

Toy Caldwell, who died of heart failure in 1993, was the band’s guitarist and wrote most of their songs. His wife Abbie Caldwell told us: “He didn’t read music, and played by ear. He jotted down words on any piece of paper available.”

Mark Chesnutt recorded this as the title track of his 2006 album Heard It in a Love Song.

Heard It In A Love Song

I ain’t never been with a woman long enough for my boots to get old
But we’ve been together so long now, they both need re-soled
If I ever settle down, you’d be my kind
And it’s a good time for me to head on down the line

I’m the kind of man who likes to get away
Who likes to start dreamin’ about tomorrow today
Never said that I loved you, even though it’s so
Where’s that duffle bag of mine, it’s time to go

I’m gonna be leavin’ at the break of dawn
Wish you could come but I don’t need no woman taggin’ along
Gonna sneak out that door, couldn’t stand to see you cry
I’d stay another year if I saw a teardrop in your eye

I never had a damn thing but what I had, I had to leave it behind
You’re the hardest thing I ever tried to get off my mind
Always something greener on the other side of that hill
I was born a wrangler and a rounder and I guess I always will