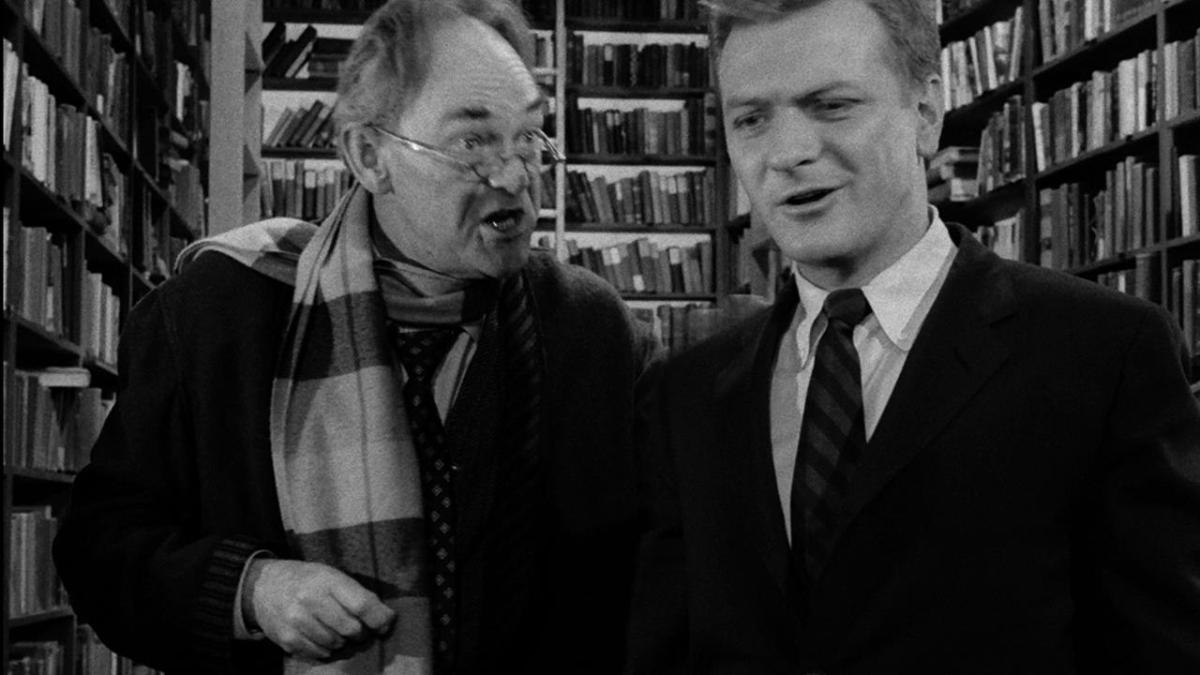 This is another “be careful what you wish for” episode. This one starts off as one of the  light hearted episodes but it’s the Twilight Zone… it turns dark near the end. The real star of this episode is John McIntire  as Professor A. Daemon…the man who has any powder, liquid, or potion that you will need. When you are done with your need…he has an answer for that also. I love the warning that he gives Roger about the love potion and how Roger blissfully ignores the wise man.

The episode is not without it’s charm but it doesn’t cross over to a great one. The twist at the end is interesting.

This was the only first season episode that was not written by one of the Big Three (Rod Serling, Charles Beaumont, Richard Matheson).

The professor is named A. Daemon, a play on words for A Demon as evidenced by the outcome.

This show was written by  Robert Presnell Jr. and  John Collier

Mr. Roger Shackelforth. Age: youthful twenties. Occupation: being in love. Not just in love, but madly, passionately, illogically, miserably, all-consumingly in love – with a young woman named Leila, who has a vague recollection of his face and even less than a passing interest. In a moment, you’ll see a switch, because Mr. Roger Shackelforth, the young gentleman so much in love, will take a short, but very meaningful journey into the Twilight Zone.

Roger Shackleforth’s infatuated with Leila, a young woman who wants nothing to do with him. Whilst monopolizing a pay phone, someone waiting to make a call refers him to Professor A. Dæmon, a seller of books, notions and potions, who – the man says – can help Roger with his love problem.. Though the Professor tries to dissuade him, Roger happily buys the potion for $1, anyways. It most certainly works. But 6 months later, Roger returns to the Professor – to find a solution to his new problem…

Mr. Roger Shackelforth, who has discovered at this late date that love can be as sticky as a vat of molasses, as unpalatable as a hunk of spoiled yeast, and as all-consuming as a six-alarm fire in a bamboo and canvas tent. Case history of a lover boy, who should never have entered the Twilight Zone.

19 thoughts on “Twilight Zone – The Chaser”