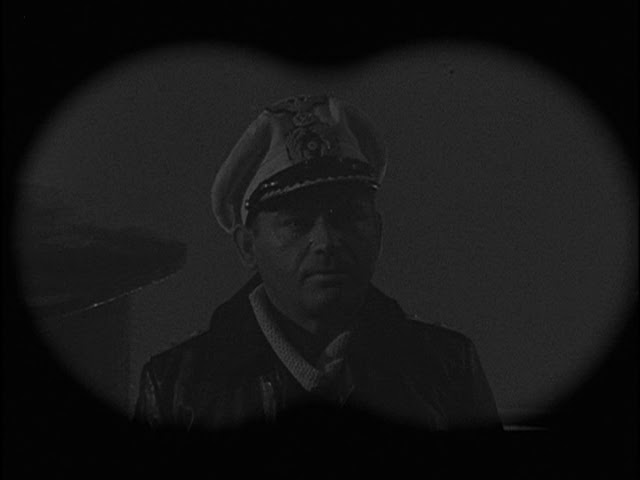 Rod Serling served in WW2 and he does have quite a few episodes about war. It’s been said that you pay for everything you do in this life. The character Carl Lanser will be paying for an eternity. World War II hadn’t been over for 15 years when Judgment Night premiered. It was still fresh in everyone’s mind.

Serling had a message starting with this episode. When Nazi’s fall in the Twilight Zone they will get their comeuppance. Serling didn’t make light of Nazis, pull any punches,  or turn them into a cartoon stereotype. Carl is portrayed as someone who perpetuated a deep evil and will be punished by God for it…and punished he is.

I love the twist in this episode but I think it is a little slow moving…but still a good one to watch. There are better WWII episodes.

Her name is the S.S. Queen of Glasgow. Her registry: British. Gross tonnage: five thousand. Age: Indeterminate. At this moment she’s one day out of Liverpool, her destination New York. Duly recorded on the ship’s log is the sailing time, course to destination, weather conditions, temperature, longitude and latitude. But what is never recorded in a log is the fear that washes over a deck like fog and ocean spray. Fear like the throbbing strokes of engine pistons, each like a heartbeat, parceling out of every hour into breathless minutes of watching, waiting and dreading… For the year is 1942, and this particular ship has lost its convoy. It travels alone like an aged blind thing groping through the unfriendly dark, stalked by unseen periscopes of steel killers. Yes, the Queen of Glasgow is a frightened ship, and she carries with her a premonition of death.

During World War II, a confused Carl Lancer finds himself as one of only a few passengers on a freighter, the S.S. Queen of Glasgow, traveling from London to New York. As he sits with other passengers, he begins to realize that he is the captain of a U-Boat that is at that very moment tracking the freighter with a view to sinking it. He also knows that in just over an hour the freighter will be attacked.

“The S.S. Queen of Glasgow, heading for New York, and the time is 1942. For one man it is always 1942—and this man will ride the ghost ship every night for eternity. This is what is meant by paying the fiddler. This is the comeuppance awaiting every man when the ledger of his life is opened and examined, the tally made, and then the reward or the penalty paid. And in the case of Carl Lanser, former Kapitan Lieutenant, Navy of the Third Reich, this is the penalty. This is the justice meted out. This is judgment night in the Twilight Zone.”