Memphis in the early 1970s was more than Big Star. Many power pop bands and artists were coming out of there at that time. Not many made it huge but many were recognized later. They formed in 1974 and released their first album Wanna Meet The Scruffs? in 1977. Like the others around this period. Many of the power pop musicians worked with each other. The Scruffs worked with Alex Chilton, Tommy Hoehn, and Jim Dickinson. Break the Ice was the first single off of the album. It reminds me of the Raspberries. 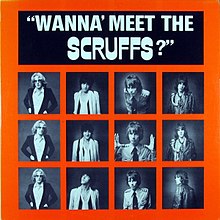 To show what some rock critics thought of the band…here is Robert Christgau (rock critic):

Only a sucker for rock and roll could love this record, and I am that sucker. A middle-period Beatles extrapolation in the manner of Big Star (another out-of-step Memphis power-pop group on a small, out-of-step Memphis label), it bursts with off harmonies, left hooks, and jolts of random energy. The trouble is, these serve a shamelessly and perhaps permanently post-adolescent vision of life’s pain, most of which would appear to involve gurls. To which objection the rockin’ formalist in me responds, “I wanna hear ‘Revenge’ again.”

Pretty good endorsement right? That is just one of many but again they just couldn’t break through. They did not have the influence like Big Star did but they were a great power pop band. I listened to all of this album and that jangle of the guitar is infectious. The song was a regional hit but was not played outside of Memphis too much. They did move to New York in 1978 had some high profile gigs at  CBGB and Max’s Kansas City.

The Band broke up in 1981 but Stephen Burns the singer, guitar player, and songwriter  would continue recording albums under the Scruffs name into the 2010’s…with Peter Buck from REM guesting on the 2011 Kill! Kill! album .

Sorry I could not find the lyrics.