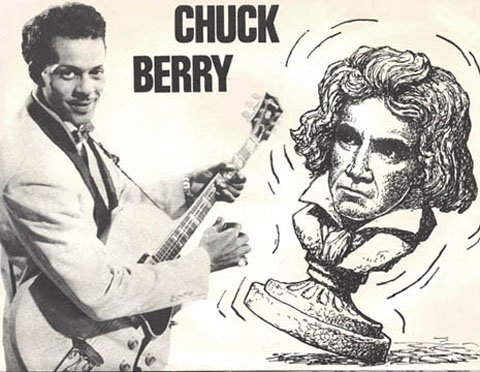 I like going back to the pioneers who started all of this. Those old raw recordings have been inspected, dissected, and copied to this day. All rock bands will do a Chuck Berry riff somewhere and most likely will cover at least one of his many songs.

I first was introduced to Chuck Berry by the Beatles faithful version. This song is a staple of early rock and roll. Everyone from George Harrison to Keith Richards were influenced by Chuck Berry. His songs were mini stories set against a fast guitar with a driving beat.

This song is about the rock ‘n’ roll craze that was taking over America. Beethoven and Tchaikovsky were classical composers who were being bumped aside by rock. At the time, many critics dismissed rock music as a passing fad…and the fad is still going on.

Berry started writing this song to rib his younger sister, Lucy, who played classical music on the family piano. Chuck was telling her to stop playing so he could play rock and roll.

Berry was careful to write lyrics that told a coherent story, which in this case follows a young many as he pursues his favorite music. Berry also took care to deliver his lyrics clearly so a wider audience could understand them. This helped him avoid the fate of many Little Richard songs: more popular, but sanitized covers by Pat Boone.

Jordan, a jump-blues innovator, certainly earned the tribute: his 1946 song “Ain’t That Just Like A Woman” has a guitar intro (played by Carl Hogan) that Berry lifted for “Roll Over Beethoven.”

The Beatles released a version of this song in 1963, which they played at most of their early live shows. The following year, The Beach Boys released “Fun, Fun, Fun,” which copied the intro to “Roll Over Beethoven” nearly note for note.

This was used in the 1992 movie Beethoven, which is about a Saint Bernard.

The Electric Light Orchestra covered this in 1973, mixing in some of Beethoven’s music. It was their biggest hit at the time, going to #6 in the UK and #42 in the US.

ELO was inducted into the Rock and Roll Hall of Fame on April 7, 2017, less than a month after Berry’s death. They opened the ceremony with a performance of this song in tribute to Berry.

For a February 4, 1977 primetime special celebrating 25 years of American Bandstand, Berry performed this song joined by Seals & Crofts, Gregg Allman, Junior Walker, Johnny Rivers, the Pointer Sisters, Charlie Daniels and Doc Severinsen. This was one of the first “all-star jams” that would later become commonplace. This performance served as a showcase for the musicians, who were introduced as they performed by Paul Williams.

Iron Maiden spoofed this on their song “Roll Over Vic Vella,” which was used as the B-side to the single for “From Now to Eternity” It’s one of the few singles that featured a photograph of the band performing as cover art.

Leon Russell often covered this song. He performed it on the musical variety show Shindig! in 1964.

The Beatles version…the bands I’ve played in used more powerful amps in a small club than the Beatles had at that time for stadiums. They made it necessary to boost the power with larger amps…to this day I don’t see how they heard each other…they probably didn’t.

Well, I’ma write a letter
I’m gon’ mail it to my local DJ
Yeah that’s the jumpin little record
I want my jockey to play
Roll over Beethoven, I gotta hear it again today

You know, my temperature’s risin’
The jukebox blowin’ a fuse
My heart’s beatin’ rhythm
And my soul keeps a-singin’ the blues
Roll over Beethoven, tell Tchaikovsky the news

I got the rockin’ pneumonia
I need a shot of rhythm and blues
I caught the rollin’ arthritis
Sittin’ down at a rhythm review
Roll over Beethoven, they rockin’ in two by two

Well in the mornin’ I’m givin’ you my mornin’
Don’t you step on my blue suede shoes
Hey diddle diddle, I’ma play my fiddle
Ain’t got nothin’ to lose
Roll over Beethoven, tell Tchaikovsky the news