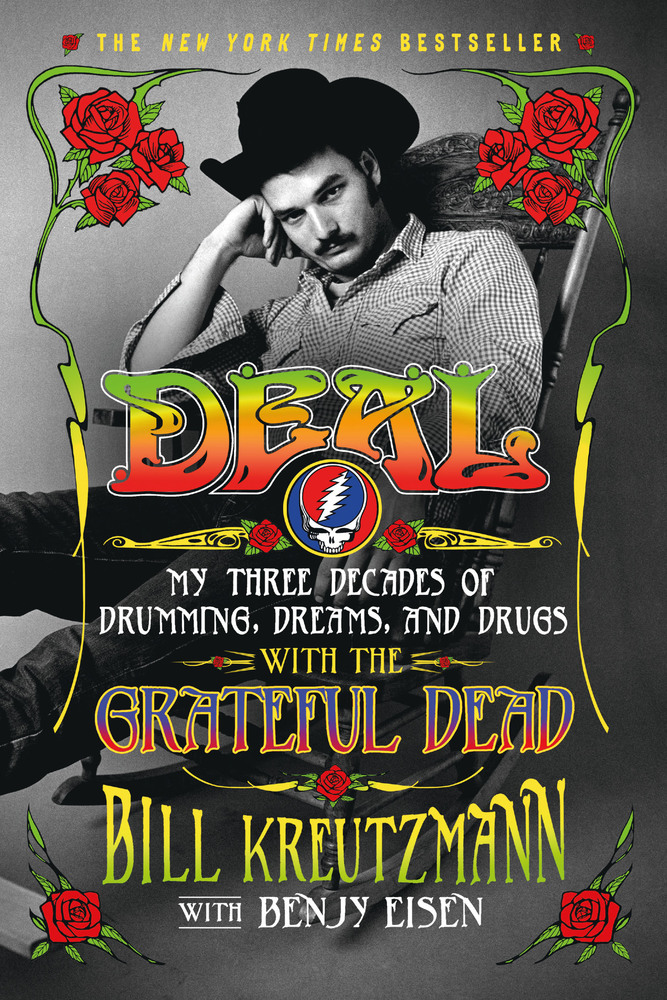 The book is called Deal: My Three Decades of Drumming, Dreams, and Drugs with the Grateful Dead.

This book is what you would imagine from the drummer (one of them) of the Grateful Dead. Music, drugs, women, drugs, travels, guns, drugs, death, drink and more drugs. Actually, I really enjoyed the book. He is very open and very honest about his actions good and bad.

He is not a shy guy whatsoever. He shares his feelings about any subject that comes up. He does go into the music and how he feels about his bandmates. Most are positive but he does not hold back.

He covers the complete career of the band. He openly said he was very happy being the only drummer of the band when Mickey Hart quit and didn’t like it one bit when Mickey rejoined the band…at first anyway.

He goes into his relationship with Jerry Garcia. He also admits the guilt the band share in not trying to help Garcia more…but Jerry was his own man. He writes about the so-called keyboard player curse the band had in their career.

He tells us about the 72 European tour, shows they played near the pyramids and the Festival Express. I will say this…this band had fun. They were like a family and treated their employees well for the most part.

The only thing that I wish he would have shared more about was Pigpen. The band was apparently in the dark about how bad Pigpen was doing before he died. Maybe he didn’t share it with them.

I learned a lot about the Dead that I didn’t know about.

The book keeps going at a good pace. With the Dead’s long career he never lacks for stories. A lot of rock autobiographies are coming out and again this one takes the template that Keith Richards made with his book “Life” and fills it in.

Bill Kreutzmann from Deal about Garcia and heroin:

I’m pretty sure Jerry wasn’t into heroin during the making of Garcia; as far I know, he hadn’t even discovered it yet. But when he did, during subsequent Grateful Dead albums, it could become difficult just to get him to show up, unfortunately. That got to be really old, really fast, for all of us. We wanted to play music with him so badly that we’d put up with it, which—in hindsight—was crazy. Nobody else in the band would’ve been able to get away with it; at least, not to the extent that he did. But Jerry Garcia was the exception.
It also opens up a moral question that we can talk about now, but we can never truly answer, since he’s not with us. There was a certain feeling, toward the end, that Jerry was using the Grateful Dead to finance his drug habit. That’s a sad thought. I don’t think he ever intended it to be that way or for it to get to that point or to hurt anyone. He was as pure of a musician as they come. But heroin addiction will change a person in ways that are tragic and discouraging.

6 thoughts on “Deal by Bill Kreutzmann”