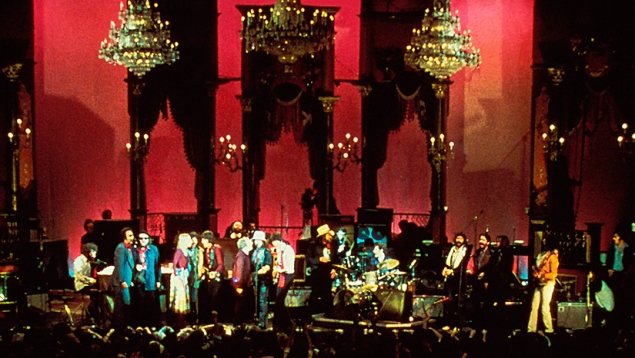 The Band on Thanksgiving in 1976 at the Fillmore West. The film starts off with THIS FILM MUST BE PLAYED LOUD! A cut to Rick Danko playing pool and then it then to the Band playing “Don’t Do It”…the last song they performed that night after hours of playing. Through the music and some interviews, their musical journey and influences are retraced.

This film is considered by many the best concert film ever made. It was directed by Martin Scorsese. I love the setting with the chandeliers that were from the movie Gone With The Wind. The quality of the picture is great because it was shot with 35-millimeter which wasn’t normally done with concerts.

Before the Band and guests hit the stage, Bill Graham, the promoter, served a Thanksgiving dinner to 5000 people that made up the audience with long tables with white tablecloths.

The Staple Singers and Emmylou Harris also appear but their segments were taped later on a sound stage and not at the concert.

Robbie wanted off the road earlier and that is what the Last Waltz was all about…the last concert by The Band with a lot of musical friends. He was tired of touring and also the habits the band was picking up…the drugs and drinking. Richard Manuel, in particular, was in bad shape and needed time.

The rest of the Band supposedly agreed but a few years later all of them but Robbie started to tour as The Band again. Richard Manuel ended up hanging himself in 1986. Rick Danko passed away in 1999 at the end of a tour of a heart attack attributed to years of drug and alcohol abuse. Levon Helm died of cancer in 2012.

The Band sounded great that night and it might be the best version you will ever hear of The Night They Drove Old Dixie Down.

The Last Waltz is a grand farewell to a great band and a film that I revisit at least twice a year… once always around Thanksgiving.

10 thoughts on “The Last Waltz”