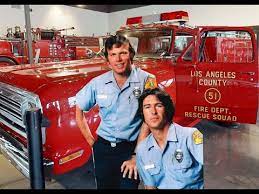 Welcome to the Hanspostcard TV Draft. I hope you will enjoy it! Today’s post was written by Dave at https://soundday.wordpress.com/

TV shows are of course, first and foremost entertainment. But once in awhile they rise above just that and can actually create change for the better. Maybe even save lives. Recently, I’ve rediscovered one such show… and a lot of memories from my childhood!

Over-the-air station COZI-TV shows nothing but oldies. It’s the television version of a Golden Oldies radio station. Andy Griffin, Magnum PI, MASH… they’re all there. And recently, a fave of eight, nine-year old me, Emergency.

Emergency was the brainchild of Jack Webb, no surprise to those who had watched his earlier show, Adam 12, picked earlier in this by Max. The two had a similar overall feel and they even showed up in cameos on each other’s shows occasionally. While Adam 12 showed the day-to-day routines of two L.A. cops, Emergency dealt with an L.A. fire station, the goings on within it and on their runs. In particular, the show which ran on NBC from 1972-77 (plus six made for TV movies through 1979) focused on two paramedics who although firemen, responded to medical calls and were trained in medical care. Roy Desoto (actor Kevin Tighe) was the blonde, easy-going one while his partner who set many a lady’s heart a-flutter (and would later be immortalized in a Tubes song) was John Gage, played by dark and oft-brooding Randolph Mantooth. The rest of the firemen on their shift at “Station 51”, as well as the doctors and nurses of the local hospital ER were supporting characters. Those included real-life husband and wife Bobby Troup and Julie London, both of whom had music careers as well as acting ones; they portrayed the senior doctor (Dr. Early) and head nurse (Dixie) at the local ER the rescue squad took patients to. The plot outline was not unlike Adam 12, with its two patrol car cop buddies who spend a lot of time discussing life and responding to nuisance calls interspersed with a few high-tension emergency calls.

On Emergency, we follow along with John and Roy as they deal with mundane, everyday issues like John’s insomnia or Roy’s wondering about where to take his kids on holiday, interspersed with a few siren-screaming runs to heart attacks and snakebites, and fewer still infernos to respond to and help people survive. It really gave a feel for what it was like to be responding to a factory on fire, or trying to resuce people stuck in a car that was at the bottom of a cliff, or be surrounded by huge wildfires the whole department was trying to contain. Of course, like Adam 12, it was full of afros, moustaches and conservative morality… youth smoking “grass” laced with pesticides freaked out and confounded doctors with their life-threatening illnesses; doctors jumped in to keep lying parents from their frightened and bruised children while doling out counseling about dealing with stress. (It did, however, coming a bit later than Adam 12, miss out on stripy bell-bottom fashion and bad guys who said things like “you’re a jive cop!” or “say your prayers… I’m gonna send you to pig heaven, copper!”)

Part drama, part light-comedy, mixed with a small amount of action… it’s a far reach from the action shows and movies that are in favor now. But somehow, it worked. We cared about the characters lives… and learned.

Emergency was made by sticklers for detail. Mantooth said “Bob Cinader, who (co) created and produced the show said ‘we’re not going to make anything up. We have to get all the rescues from real fireman’s logs.” Mantooth and Tighe both took real paramedic courses, although they didn’t take the tests to be certified as such, and rode along with real L.A. firemen extensively. The exterior shots used a real L.A. fire station (Station 127 in Carson) and a real hospital nearby. Producers got to borrow an authentic L.A. pumper truck ( the Engine 51 in the show) and apparently, on a few shots forgot to relabel it as such, meaning the eagle-eyed viewer could sometimes see Station 51 responding in a differently-numbered truck. Driven by an actor, Dick Hammer, who played… Dick Hammer. You see, Hammer not only used his real name, he played his own role in real life – he was an actual L.A. fireman, thus having fire training and a license to drive the large vehicles. They opted for realism, which certainly helped us believe the episodes and feel engaged.

Roy and John, the paramedics, went to their medical calls in a modified pickup with all sorts of medical supplies, and radios to the hospital. Since they had medical training, they could undertake medical procedures like give IVs or CPR with the doctor’s instructions over the radio. At the time, the paramedic trucks were new and few and far between, so L.A. couldn’t loan them one. Thus the show got the blueprints and built an authentic replica themselves, and stocked it with the real equipment the true first responders used in the day.

It was interesting. It gave us a look at the ordinary work of fire-fighters and paramedics and some of the crazy calls they had to deal with. And in a small way, it changed the world.

Not only did Emergency pave the way for later, more action-packed shows like E.R. and Station 19, it changed society as well.

ME TV point out that when the show first aired, there were only 12 – one dozen – fire departments with paramedics in the entire country. (I was surprised to read that my particular hometown in Canada was the very first in that country to have paramedics in their fire department, that being in 1971). Then California governor Ronald Reagan had only signed legislation allowing for firemen to be trained as paramedics the previous year and L.A., Seattle and Miami were the only notable large urban areas in the U.S. with them at the time. What’s more, ambulances were largely nothing more than taxis for sick and injured people. The personnel on them did little besides get the patient to doctors and help down the road. By the end of the show in mid-’77, fully half of all Americans were within 10 minutes of responding fully-trained paramedics. Lives were saved…. and one has to imagine that Emergency was behind it. It’s hard to innumerate, but oral history suggests a lot of fire departments and city councils got on board to train their firemen and supply them with medical gear when people started wanting their town to have its own John Gage, Roy Desoto and Squad 51. A University of Baltimore study says “ample evidence suggests a conclusion that the TV show was a primary factor that fueled…paramedic training.” EMS World call Randy Mantooth the “goodwill ambassador” for their profession and point out “for all the popularity of classic shows such as the Honeymooners and Gunsmoke, the number of people they inspired to become bus drivers or sheriffs was probably small.” Not so Emergency. Schools offering the training to be paramedics saw a surge of applicants shortly after the show premiered.

Pretty cool. A little bit campy, a little comic, a little bit educational. Bits of high excitement, and lots of cool retro vehicles and fashions. I still enjoy it. What’s more, it was a show that changed history and made life safer. And still is interesting to watch close to 50 years on. Methinks we’ll never be saying that about the Kardashians.