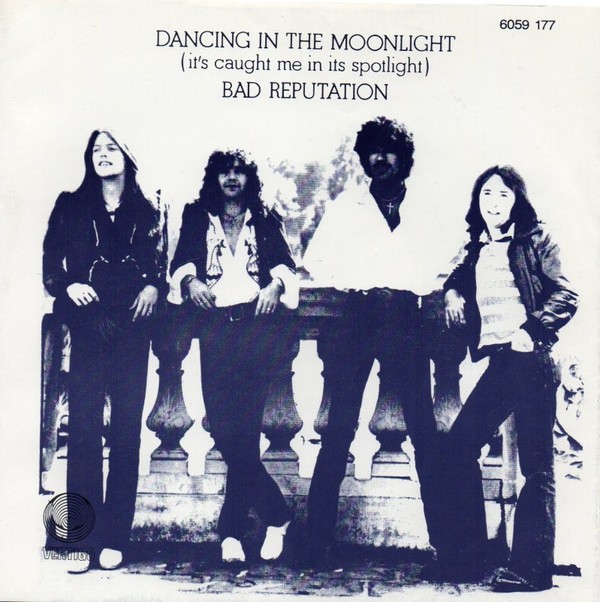 I love listening to Phil Lynott sing. Thin Lizzy could give you a lot of different-sounding songs. In this song, it sounds like Phil was listening to the Moondance album by Van Morrison.

The record company added the (It’s Caught Me In It’s Spotlight) so people would not confuse this with the old AM hit Dancing In The Moonlight by King Harvest that I’ll be going over this week!

It’s the way Lynott phrased his lyrics that added to the experience. Thin Lizzy also had some great twin harmony lead guitar parts that made their sound. They were unique, to say the least. You had a black Irish bass player fronting a rock band and singing like a cross between fellow Irishman Van Morrison and American Bruce Springsteen. They were not just a hard blues band. They mixed rock, country,  blues, Celtic, and a little jazz in the mix.

The band’s name is a play on Tin Lizzie (“Thin” being pronounced “Tin” in an Irish accent). Tin Lizzie is either a reference to a robot character from The Dandy Comic or a nickname for the Model T Ford…

Phil Lynott was the principal songwriter, but he encouraged the rest of the band to contribute their own material.

Scott Gorham (lead guitarist…one of them): “He taught us how to do this thing called ‘song writing.’ And until we got better and better at it and we could actually bring our own songs in, we brought in songs that were either partly finished or just ideas to put on one of his songs. We might bring in a song that was half finished, or a whole song minus the lyrics. And it was always minus the lyrics, because that was Phil Lynott’s domain. We knew that we weren’t ever going to touch or top his lyrics. So you just let him get on with it.”

Later on The Smashing Pumpkins covered “Dancing in the Moonlight (It’s Caught Me in Its Spotlight)” for various live performances.

Phil Lynott’s short life has been memorialized by a life-size bronze statue erected in central Dublin, just outside one of the famed bass player’s favorite pubs.