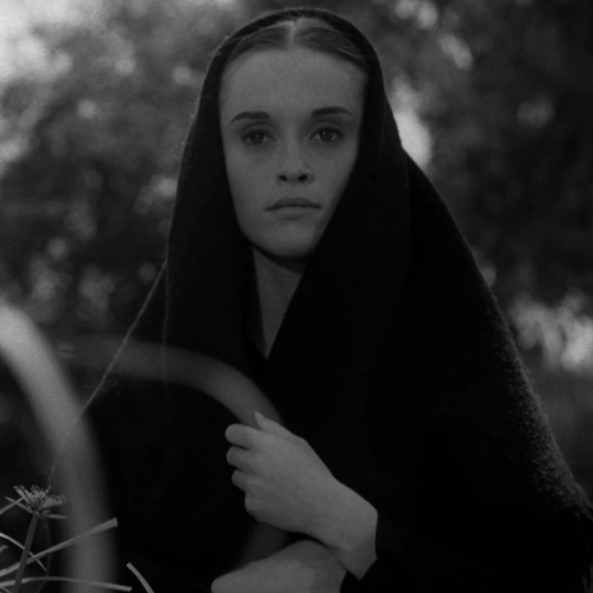 There are two episodes in the 5th season that I differ from many Twilight Zone fans…and this is one of them. I think it is the creepiest episode of them all.  I’ve watched it countless times and I see something else every time I do. This show covers a plot device that the Twilight Zone has covered before but I like this take on it…a time loop…an endless cycle.

Bonnie Breecher plays a beautiful girl named Mary Rachel who Burney hears singing a haunting ballad. Rachel falls in love with him but is powerless to change his preordained fate, as it seems Floyd is destined to live the song he wants to purchase. Floyd Burney is too self-centered to comprehend the bigger picture of the strange situation he finds himself in. Mary Rachel’s alter-ego also appears in an almost mourning demonic form throughout. The setting of this episode heightens the creepy atmosphere. You feel for Floyd Burney although you don’t really like him.

IMDB Trivia: This was the final episode of The Twilight Zone (1959) to be filmed, although two episodes filmed earlier were aired afterward.

As a teenager, Liza Minnelli auditioned for the role of Mary Rachel opposite Gary Crosby. Minnelli was so nervous that the producer William Froug commented: “She’ll never make it.” Minnelli lost out to Bonnie Beecher. This episode was Ms. Beecher’s acting debut.

The headstock of Floyd Burney’s guitar has black tape across the label covering the Gibson name brand.

Producer William Froug: One of the people I interviewed was this nervous, frightened little girl whose hands shook and who was covered with sweat, and I said, Shell never make it. Her name was Liza Minnelli. And I chose Bonnie Beecher, and we all know what became of Bonnie Beecher!

I’ll never forget Liza Minnelli sitting there and her agent saying, This girl can really sing. I said, I’m sure she can, but I thought, Oh, she is so nervous! She’s scared out of her mind. To picture her as a hillbilly singer: no way. And I must tell you and this is the truth at the time, I sat there thinking, Well, I’ll probably kick myself for this but I can’t see this girl playing the part but shell probably be a big star. I still don’t regret it, but it was really classic stupidity.

This show was written by Rod Serling and Anthony Wilson

Mr. Floyd Burney, a gentleman songster in search of song, is about to answer the age-old question of whether a man can be in two places at the same time. As far as his folk song is concerned, we can assure Mr. Burney he’ll find everything he’s looking for, although the lyrics may not be all to his liking. But that’s sometimes the case – when the words and music are recorded in the Twilight Zone.

Singer Floyd Burney, the “Rock-a-Billy-Kid”, goes deep into the back woods hoping to find his next hit record. He no sooner arrives than he hears a beautiful singing voice which draws him deeper into the woods. He eventually meets Mary Rachel who tells him the song he heard belonged to someone and that she’s forbidden to tell anyone about it. When she finally reveals it to him, Floyd learns that his future is preordained.

The Complete Episode on Dailymotion.

Below is a short clip…I would recommend watching the episode if you have time.

In retrospect, it may be said of Mr. Floyd Burney that he achieved that final dream of the performer: eternal top-name billing, not on the fleeting billboards of the entertainment world, but forever recorded among the folk songs of the Twilight Zone.

24 thoughts on “Twilight Zone – Come Wander with Me”