It’s time once again for some big 1970’s boogie arena rock to start your day. Appropriately named…this rock filled up arenas around the world. The sound was fat and loud and it fit the times perfectly.

“Fool For The City” is the title track from the album of the same name released by Foghat in 1975. It was written by the band’s frontman Dave Peverett, who also wrote their hit “Slow Ride.”

Foghat was a talented band. Dave Peverett was a good singer, guitar player, and songwriter. Other Foghat alumni who made their mark elsewhere in music include replacement lead vocalist Charlie Huhn, who was also in Humble Pie and in Ted Nugent’s band before that. Also, Foghat guitarist Bryan Bassett is better known as the lead strings on “Play That Funky Music” by Wild Cherry.

I always liked this album cover 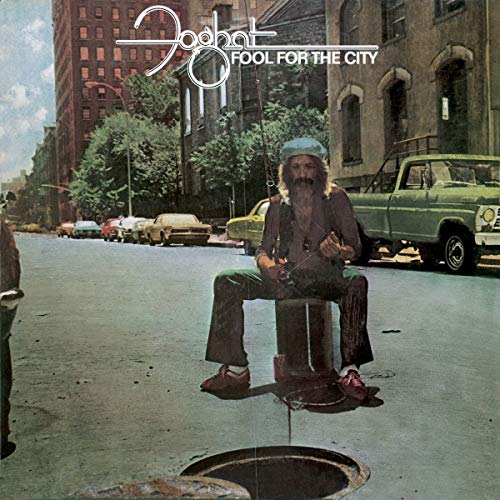 That is Foghat’s drummer Roger Earl on a soapbox fishing in a man hole cover in New York on East 11th Street.

Foghat formed in London, and as this song makes clear, they’ll take city life over Green Acres country any day. While there are plenty of songs about specific cities (especially New York), this song can relate to any city. The band did a great deal of touring after they formed in 1971, so it makes sense that they would come up with a tune about their travels.

This song is a great example of the “boogie rock” genre. Boogie rock came out of blues-rock and tends to feature a repetitive, driving rhythm, and a laid-back attitude with no sign of being pretentious. In the US, think ZZ Top and Lynyrd Skynyrd. In the UK, the vanguards of boogie rock were Status Quo, Humble Pie, Savoy Brown, and Foghat. The Doobie Brothers might get a nod here as well; Foghat started out in the UK but transplanted to the US, and the Doobie’s “China Grove” had come out only two years before. Boogie rock and mid-1970s’ pot culture also went along extremely well together, which certainly didn’t hurt its popularity any.

Surprisingly, this song is rarely used in commercials, TV shows or movies. The only use we know of is the 2013 movie Nebraska.

Fool For The City

Going to the city, got you on my mind,
Country sure is pretty, I’ll leave it all behind,
This is my decision, I’m coming home to stay this time

Breathing all the clean air, sitting in the sun,
When I get my train fare, I’ll get up and run
I’m ready for the city, air pollution here I come

I ain’t no country boy, I’m just a homesick man
I’m gonna hit the grit just as fast as I can

I’ll get off on Main Street, step into the crowd,
Sidewalk under my feet, yeah, traffic’s good and loud
When I see my inner city child, I’ll be walkin’ on a cloud