This one is a very good episode with some fine acting by Franchot Tone and Liam Sullivan. There is not just one twist at the end of the episode but two of them. This episode has no supernatural events and it is not a typical episode of the Twilight Zone. It’s pure story and what a story. It was set in a prestigious Gentlemen’s Club with a talkative younger man named Jamie Tennyson (Liam Sullivan) and the grumpy older fellow named Colonel Archie Taylor (Franchot Tone).

Tennyson annoyed Taylor to no end with his non stop chatter. We didn’t get to see a lot of this but Taylor does hate the man. After handing him a note and then announcing to every one…he bet Tennyson $500,000 that he could not be completely quiet for a year. The story goes from there.

Below is a very interesting real life story on the set about the wonderful character actor Franchot Tone. 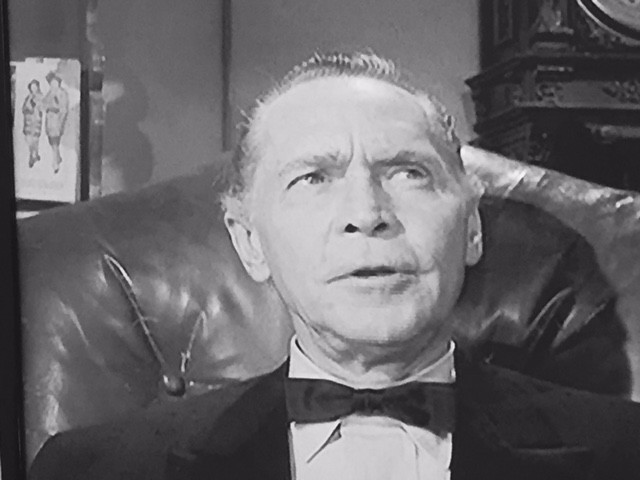 The episode present a lot of challenges. The first headache went to George Clemens (Cinematographer). The set where the character Sullivan was to be imprisoned was made up entirely of panes of glass. When I saw the set, I pretty near lost my lunch, Clemens recalls. How in the world am I going to get a light in there, and show light, without getting reflections? But Buck Houghton had hired the right man, and Clemens persevered. Once I started on the thing, he says, I think I only had to take two panes of glass out in the whole picture.

The first days shooting went just fine. The opening and closing scenes of the episode, both of which take place in the main room of the mens club, were completed. The company broke for the weekend. But the biggest problem was yet to come.

On the second day of shooting, Franchot Tone didn’t show up, Serling recalled years later. And we waited and we waited. The call is six in the morning. When it got to be ten a.m. and everybody had been sitting there in their own smoke waiting and no Franchot Tone, we get his agent who tracks him down. He is in a clinic.

Stories differ. According to Liam Sullivan, Tone told him that he’d been at a party and, in attempting to pick a flower for his date off a bush on the terrace, had fallen down a hillside and landed on the driveway of the house next door. According to Serling, Tone had approached a girl in the parking lot of a restaurant and her boyfriend had taken offense and beaten him up. Whatever the truth, the result was still the same: half of Tones face was scraped raw.

With one days shooting in the can, recasting was out of the question. Serling: I said, So be it. Come on in, Franch, and well shoot the other side of your face, which we did.

The result was indeed odd. During the opening scene of the episode, we see Tone full face. When the scene changes to the glass cage in which Sullivan is imprisoned, we only see Tones face in profile or with half of it obscured. Then in the final scene, we see Tone full-face again.

Surprisingly, the effect works to the episodes advantage. The scenes in the middle are those in which Tone tries to convince Sullivan to break his silence, using every dirty trick he can think of, including relaying ugly rumors about Sullivans wife. Speaking out of the corner of his mouth, only half-turned toward Sullivan, Tone seems predatory and sly, what he says takes on an added suggestiveness. The impact was not lost. In fact, director Boris Sagal once recalled that at the time a number of critics complimented him on the effect!

The note that this man is carrying across a club room is in the form of a proposed wager, but it’s the kind of wager that comes without precedent. It stands alone in the annals of bet-making as the strangest game of chance ever offered by one man to another. In just a moment, we’ll see the terms of the wager and what young Mr. Tennyson does about it. And in the process, we’ll witness all parties spin a wheel of chance in a very bizarre casino called the Twilight Zone.

Jamie Tennyson is an overly talkative member of a private men’s club. He is challenged by fellow member Col. Archie Taylor to keep his mouth shut for one year. Should he do so, he would win $500,000. Taylor dislikes Tennyson and if nothing else, finds this a way to get a bit of peace and quiet at the club. Tennyson will live in a room in the club, under observation and will communicate in writing only. As the months go by, Taylor begins to worry that Tennyson may just succeed. He can’t believe Tennyson’s will but neither party proves to be completely honorable.

Mr. Jamie Tennyson, who almost won a bet, but who discovered somewhat belatedly that gambling can be a most unproductive pursuit, even with loaded dice, marked cards, or, as in his case, some severed vocal cords. For somewhere beyond him, a wheel was turned, and his number came up black thirteen. If you don’t believe it, ask the croupier, the very special one who handles roulette – in The Twilight Zone.

13 thoughts on “Twilight Zone – The Silence”