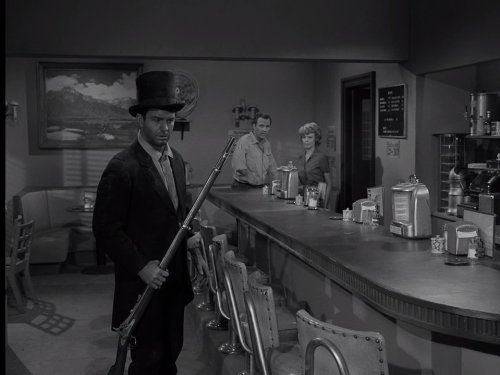 This one is an excellent quality episode. A time travel episode that uses a place over the rim instead of a time machine.  Future Walton’s sheriff John Crawford plays the café owner Joe. This episode resolves it self and has a satisfying end…and really plays on some of the time elements.

The episode has many good performances, but  Cliff Robertson holds the show together. As Chris Horn, he plays his role with intelligence and conviction, seeming in movement, expression, and even his accent is on the mark. He really got into this role as you will read below and it shows. His performance is worth the price of admission by itself.

Some trivia from IMDB:  Cliff Robertson did extensive research on the 1840s time period in which the episode is set. Robertson concluded that an easterner like Horn would have worn a stovepipe hat, whereas the director, fearing that such a hat would make Horn look comical, wanted him to wear an ahistorical Stetson. The dispute was finally taken to producer Rod Serling who, after hearing both sides, decided to let Robertson wear the stovepipe hat, as seen in the filmed version.

John Astin appears in this and I will watch anything Astin is in. This was before he became known as Gomez Addams.

The year is 1847, the place is the territory of New Mexico, the people are a tiny handful of men and women with a dream. Eleven months ago, they started out from Ohio and headed west. Someone told them about a place called California, about a warm sun and a blue sky, about rich land and fresh air, and at this moment, almost a year later, they’ve seen nothing but cold, heat, exhaustion, hunger, and sickness. This man’s name is Christian Horn. He has a dying eight-year-old son and a heartsick wife, and he’s the only one remaining who has even a fragment of the dream left. Mr. Chris Horn, who’s going over the top of a rim to look for water and sustenance and in a moment will move into the Twilight Zone.

Christian Horn is member of an 1847 wagon train headed west. They are 1500 miles from St. Louis and are now in the New Mexico desert. Many in the wagon train are ready to turn back but Chris wants everyone to persevere. His son has had a fever for 11 days now and Chris goes off looking for water, only 100 yards or so from the others and suddenly finds himself in the present day. He can’t quite bring himself to believe what he sees or where he is but those he meets believe he’s a man from the past. The trip in time does have one positive outcome.

Mr. Christian Horn, one of the hearty breed of men who headed west during a time when there were no concrete highways or the solace of civilization. Mr. Christian Horn, and family and party, heading west, after a brief detour to The Twilight Zone.

14 thoughts on “Twilight Zone – A Hundred Yards Over the Rim”