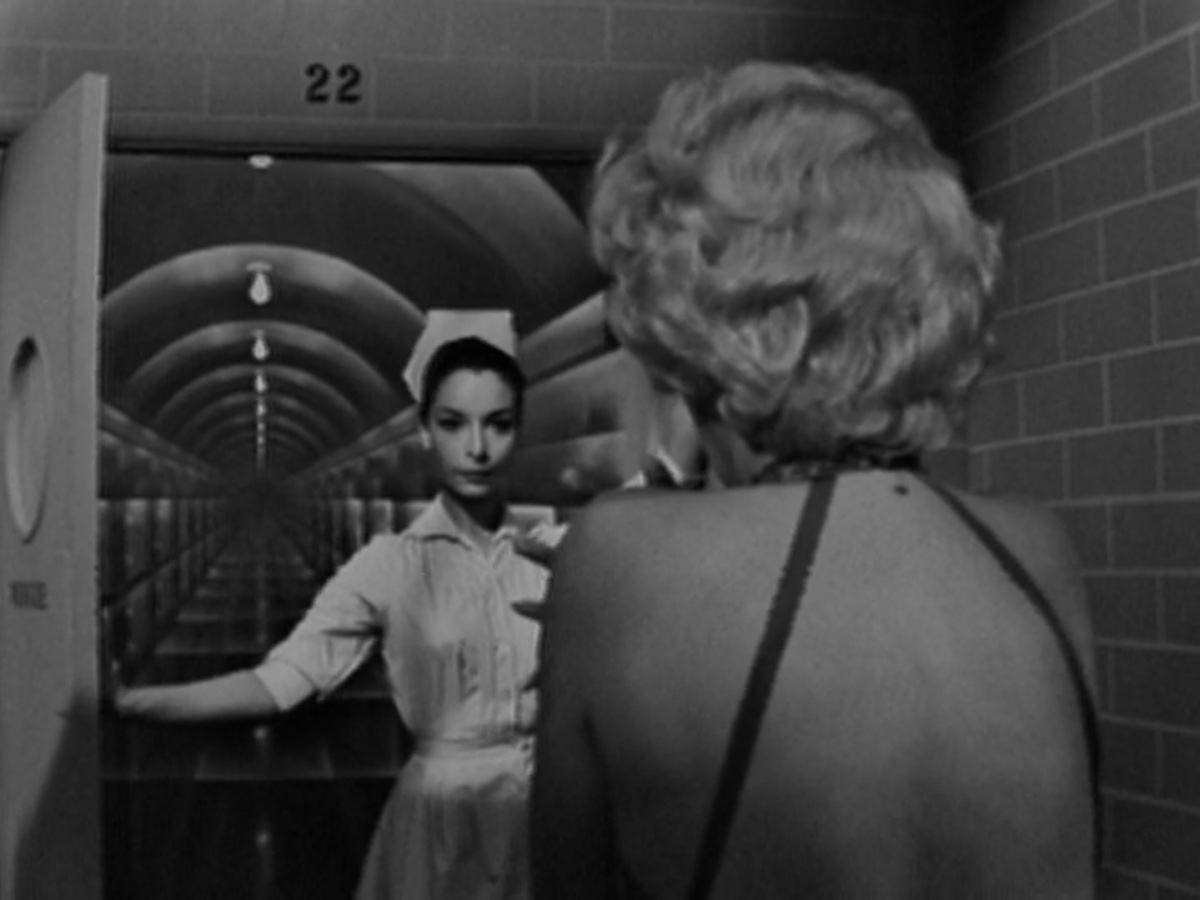 I like how diverse the Twilight Zone was from week to week. The last episode was a good comedic episode Penny For Your Thoughts…and this one is anything but comedic. I know some people who say the Twilight Zone really scares them. This one would fit that bill. It is one of the most frightening episodes of the show. This is one of the videotaped episodes that benefits from it. It gives it an eerie look that only helps the story.

Rod Serling adapted Twenty-Two from a short story in Famous Ghost Stories, edited by Bennett Cerf. In the original, an attractive young New York girl visits the Carolina plantation of some distant relatives. In adapting the story, Serling kept the basics but changed the setting from plantation to hospital and the vision from coach to morgue.

Arlene Martel (credited here as Arlene Sax) plays the nurse in the morgue who taunts Liz Powell with the “room for one more,” line. In order to make her look more sinister, they used makeup to give her a somewhat demonic look, complete with arched eyebrows.

This show was written by Rod Serling and Bennett Cerf

This is Miss Liz Powell. She’s a professional dancer and she’s in the hospital as a result of overwork and nervous fatigue. And at this moment we have just finished walking with her in a nightmare. In a moment she’ll wake up and we’ll remain at her side. The problem here is that both Miss Powell and you will reach a point where it might be difficult to decide which is reality and which is nightmare, a problem uncommon perhaps but rather peculiar to the Twilight Zone.

Liz Powell – an exotic dancer – is suffering from exhaustion and is being treated at hospital prior to a scheduled engagement in Miami. She has a recurring nightmare where she takes the elevator down to the morgue and is invited in by an ominous-sounding nurse, who tells her, ‘room for one more’. Her doctor assures her there’s nothing wrong with her physically and she’s just overworked and tired. To Liz, the nightmare’s very real. The doctor suggests she try to break the pattern to see if she can get them to stop. The next time she has the dream, she travels down to the morgue but the dream goes off as before. With her medical issues taken care of, and her Miami engagement a day away, it’s time for Liz to leave. But it’s her nightmare over?

Miss Elizabeth Powell, professional dancer. Hospital diagnosis: acute anxiety brought on by overwork and fatigue. Prognosis: with rest and care, she’ll probably recover. But the cure to some nightmares is not to be found in known medical journals. You look for it under ‘potions for bad dreams’ – to be found in the Twilight Zone.