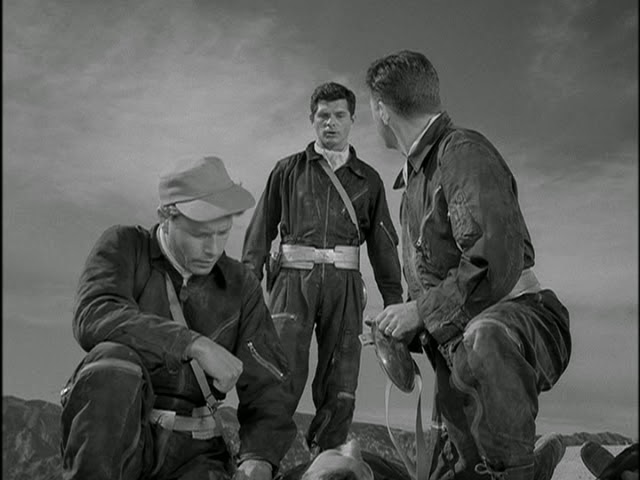 Serling like to show the best and worse of people and this episode has both. Edward Binns plays the honorable Col. Bob Donlin and Dewey Martin  plays the selfish Corey who folds under pressure in the worse way.  A space ship is launched and crashes on what seems an unknown asteroid…survival will be difficult for the 4 survivors of the crash. It’s hot, rocky, and no water in sight. Cory is determined to survive no matter what. It’s a very good episode…I went back between 3 1/2 and 4 but the twist pushes it over the top.

Rod Serling was at a party when he was approached by a woman named Madelon Champion who told Serling a what if story and this was it. Serling gave her $500 dollars on the spot and gave her a co-writing credit.

Rarely did this happen… here is a quote from Rod Serling: I got 15,000 manuscripts in the first five days. Of those 15,000, I and members of my staff read about 140. And 137 of those 140 were wasted paper; hand-scrawled, laboriously written, therapeutic unholy grotesqueries from sick, troubled, deeply disturbed people. Of the three remaining scripts, all of clearly poetic, professional quality, none of them fitted the show.

This show was written by Rod Serling and Madelon Champion

Her name is the Arrow 1. She represents four and a half years of planning, preparation, and training, and a thousand years of science, mathematics, and the projected dreams and hopes of not only a nation, but a world. She is the first manned aircraft into space and this is the countdown. The last five seconds before man shot an arrow into the air.

This is the story of a group of spacemen who crash on what they think is an asteroid. Since they are doomed, the Captain tries to keep military protocol. Nevertheless, Cory, one of the men, becomes a survivalist. He becomes selfish and begins to take over. He kills. He steals water. He whines. The story works toward an ironic twist, bringing out the best and the worst in everyone. Patience goes out the window over water. Remember the two men fighting at the conclusion of Von Stroheim’s Greed. There is a bit of this because when our lives are on the line, we often try to hold on to every second we can. Cory can’t see honor or morality or order. It’s just to grasp for that one more drop of precious water.

Now you make tracks, Mr. Corey. You move out and up like some kind of ghostly billyclub was tapping at your ankles and telling you that it was later than you’d think. You scrabble up rock hills and feel hot sand underneath your feet and every now and then, take a look over your shoulder at a giant sun suspended in a dead and motionless sky…like an unblinking eye that probes at the back of your head in a prolonged accusation.

Mr. Corey, last remaining member of a doomed crew, keep moving. Make tracks, Mr. Corey. Push up and push out because if you stop…if you stop, maybe sanity will get you by the throat. Maybe realization will pry open your mind and the horror you left down in the sand will seep in. Yeah, Mr. Corey, yeah, you better keep moving. That’s the order of the moment: keep moving.

Practical joke perpetrated by Mother Nature and a combination of improbable events. Practical joke wearing the trappings of nightmare, of terror, and desperation. Small, human drama played out in a desert 97 miles from Reno, Nevada, U.S.A., continent of North America, the Earth and, of course, the Twilight Zone.