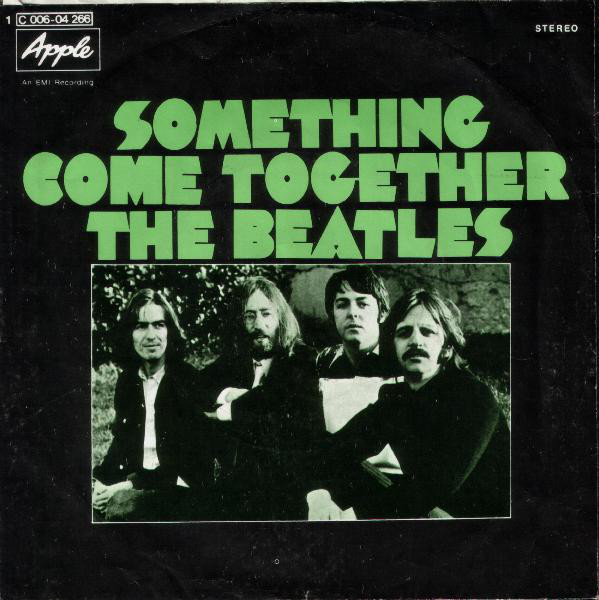 This was released as a double A-side single with “Come Together.” It was the only song written by George Harrison released as a single by The Beatles. They had used some of his songs as B-sides, including “The Inner Light” and “Old Brown Shoe.”

The song was written about his then-wife Pattie Boyd. This song moved his songwriting abilities up… in the eyes of his bandmates Lennon and McCartney. George had written some very good songs before like Taxman, If I Needed Someone, and While My Guitar Gently Weeps but this one…this one placed him in another league. George had two of the highlights on the album wth Something and Here Comes The Sun.

Harrison wrote this during a break while they were working on The White Album. It was not recorded in time for the album, so Harrison gave this to Joe Cocker, but Cocker didn’t release it until after The Beatles did.

When I  saw Paul McCartney in 2014 he played this as a tribute to George Harrison. He played a version of this using a ukulele George had given him…and it made it really special.

Frank Sinatra called this “”the greatest love song of the past 50 years”.” He often performed it in the ’70s, at one point wrongly attributing it to Lennon and McCartney rather than Harrison.

With at least 200 cover versions on record, this is the second-most-covered Beatles song; only “Yesterday” has been covered more.

Harrison chastised McCartney for being too active with his bass lines in this song. In the past, Paul had sometimes been critical of George’s guitar playing on his songs. I have to say though…Paul did a great job on this song…his bass playing compliments the song.

Pattie did inspire “Layla” when Eric Clapton realized he loved her a few years later. She and Clapton were married from 1979-1988 (he also wrote “Wonderful Tonight” for her).

In her 2007 book Wonderful Tonight: George Harrison, Eric Clapton, and Me, Pattie Boyd wrote: “George wrote a song called ‘Something.’ He told me in a matter-of-fact way that he had written it for me. I thought it was beautiful and it turned out to be the most successful song he ever wrote, with more than 150 cover versions. George’s favorite version was the one by James Brown. Mine was the one by George Harrison, which he played to me in our kitchen. But, in fact, by then our relationship was in trouble. Since a trip to the Maharishi Mahesh Yogi’s ashram in India in 1968, George had become obsessive about meditation. He was also sometimes withdrawn and depressed.”

Harrison came up with the title and the first line after listening to a James Taylor song called “Something In The Way She Moves.” Taylor was signed to Apple Records (The Beatles’ label) at the time.

This is the only song on the Beatles 1 album that was not a #1 hit on its own in the US or UK. “Something” and “Come Together” spent one week at #1 on Billboard’s Hot 100 chart when the compilers of the chart changed its ranking method and stopped giving separate rankings for the two sides of a single. It was also gave Harrison representation among the 27 tracks.

This was used in a commercial for Chrysler cars in 1987.

John Lennon said that this was his favorite song on Abbey Road.

Harrison wrote this on a piano. The Beatles often composed and recorded separately at this time.

Harrison pictured Ray Charles on vocals when he wrote this. Charles did eventually cover it.

With 21 string players used in overdubs, this ended up being one of the most orchestral Beatles songs. This sound made it a staple of light rock radio and, in bowdlerized instrumental form, Muzak.

Before this was edited down, it contained a long instrumental tag at the end.

Dave Grohl, a former member of Nirvana and leader of The Foo Fighters, recorded a tribute song to Harrison on the Foo’s first album called “Oh, George” based on the guitar lead to this. Harrison was Grohl’s favorite Beatle, and this was one of the first leads he learned to play on guitar.

59 thoughts on “Beatles – Something”