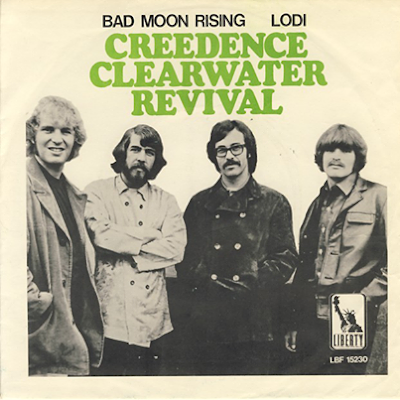 Every bar band who has ever played this song in hole in the wall bar… can relate to the lyrics. This song was the B-Side to Bad Moon Rising. CCR and The Beatles had the best double-sided singles of anyone in my opinion.

Lodi is a city in California located in the central valley, about 38 miles south of Sacramento and 87 miles away from Oakland. Fogerty and his earlier band (The Golliwogs) often performed in out of the way towns like Lodi.

Drummer Doug Clifford on Lodi California: “There were nine people in there, they were all locals, they were all drunk and all they did all night was tell us to turn it down.”

In Fortunate Son: My Life, My Music, John Fogerty explained that the inspiration for “Lodi” came from trips with his father around central California, an area of the world where he “felt very warm and special.” This seed of an idea grew into a story about a traveling musician whose career “is in the rearview mirror.” Fogerty was only 23 when he wrote this song about an aging musician.

This song is a reflection on John Fogerty’s days with The Golliwogs, an early version of Creedence Clearwater Revival. They had to struggle for success, playing wherever they could with dilapidated equipment and an often indifferent audience. He did not want a return to the Bad Old Days.

Al Wilson recorded a cover of this song. His version was issued on Soul City Records in America and on Liberty Records in the United Kingdom. It was played extensively in the few underground “Northern Soul” clubs of England during the late 1960s and early ’70s, getting its first exposure at the famous Twisted Wheel Club Allnighters in Manchester, England.

In a radio interview, John Fogerty said when he was young his parents took him and his brother to camp at Lodi lake (called Smith lake then) and they hated camping there. So later on they wrote a song about Lodi using their old hatred for the place.

Tesla did an acoustic version of this song that was included on their 1990 live album, Five Man Acoustical Jam. Each band member got to pick a song to cover for the set, and Tesla drummer Troy Luccketta chose “Lodi” since he was born there.

Just about a year ago
I set out on the road
Seekin’ my fame and fortune
Lookin’ for a pot of gold
Thing got bad and things got worse
I guess you know the tune
Oh Lord, stuck in Lodi again

Rode in on the Greyhound
I’ll be walkin’ out if I go
I was just passin’ through
Must be seven months or more
Ran out of time and money
Looks like they took my friends
Oh Lord, I’m stuck in Lodi again

A man from the magazine
Said I was on my way
Somewhere I lost connections
Ran out of songs to play
I came into town, a one night stand
Looks like my plans fell through
Oh Lord, stuck in Lodi again