Star Trek was a great part of my childhood. The Starship Enterprise or USS Enterprise was as big of a character as Spock or Captain James T. Kirk.

The USS Enterprise was designed by the original TV show’s Art Director Walter M. Jefferies, with input from series creator Gene Roddenberry. The ship’s registration number, NCC-1701, was inspired by Jefferies’ own 1935 Waco YOC airplane – which had the registration number NC-17740.

Two models of the Enterprise from the original series are still known to exist. The main model measures about 11 feet long, 32 inches high, and weighs about 200 pounds. That is a huge model.

It was made mostly of wood and formed plastic. The two engine pods were made using sheet metal tubes.

A second model, measuring about 18 inches long, was also used for some special effects shots in the series. It was made and fitted with blinking lights.

In 1974, the large Enterprise model was donated by Paramount Pictures to the Smithsonian Institute. It has been on display at their Air and Space Museum.

Walter’s brother John Jefferies owned the smaller model until December of 2001… it was then sold to a private collector.

So if you want to see the large USS Enterprise you will have to go to the Smithsonian. It is the one that appeared in every episode.

Restoring the original model at the Smithsonian. If you want to read about it…cool article here… https://www.popularmechanics.com/culture/tv/news/g2454/the-restoration-of-the-original-star-trek-enterprise-is-underway/ 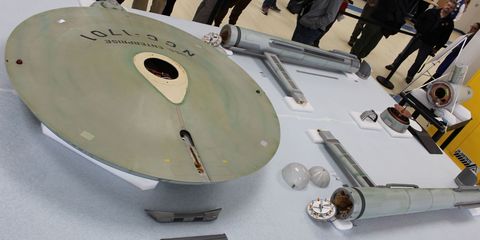