It’s unbelievable how close this famous movie prop came to being lost.

The model used in the film along with some other props were thought to be garbage after the movie finished filming.

Many of the props were kept in a facility called Dollar Moving and Storage. The storage unit was rented by the studio and upon completion of postproduction, the studio decided they no longer wanted to pay rent and ordered everything in storage to be discarded. An employee named Doug W. rescued many of the props from the garbage including the Death Star. In a world before ebay…who knows what was lost.

Doug displayed the Death Star in his home in California for about a decade. Around 1988, Doug moved to Missouri and stored the Death Star at his mother’s antique shop (Sutter’s Mill Antiques, later renamed The Mexican Hillbilly) in Missouri.

Todd Franklin, a Star Wars collector living in the area, drove by the antique shop and was immediately convinced it had to be the original Death Star model. Todd wondered how and why the original Death Star was in Missouri. He made some calls and was convinced it was the one. He was going to buy it but before he got back it was sold to another person named Mark who was the owner of a country and western music show called Star World. Mark displayed the Death Star in the lobby.

In 1994 Todd, his brother Pat, and friend Tim Williams traveled to Star World who was going out of business. The Death Star was being used as a trash can in the corner! Todd made an offer and bought it on the spot. All three owned it and contacted Lucasfilm but they did not want to buy it back.

Since then, Lopez has had the original Death Star on display in a custom-made case in his home, and he even loaned it to the Museum of Pop Culture in Seattle (though Lopez refers to it by its former name: the EMP (Experience Music Project) Museum) for a five-year stint.

Gus Lopez: “The EMP gave it top billing in the museum with a prominent spot at the center of one of the main rooms. I got a kick out of reading about the Death Star in local tourist literature and walking by the Death Star on display at the museum to hear conversations from people telling their stories about what Star Wars meant to them. And now the Death Star is back home, where I see it every day. And when I look at it, I am still amazed it survived its long journey and is sitting right in front of me.” 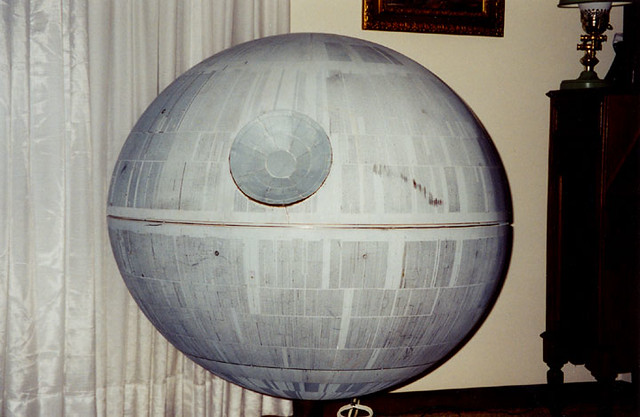