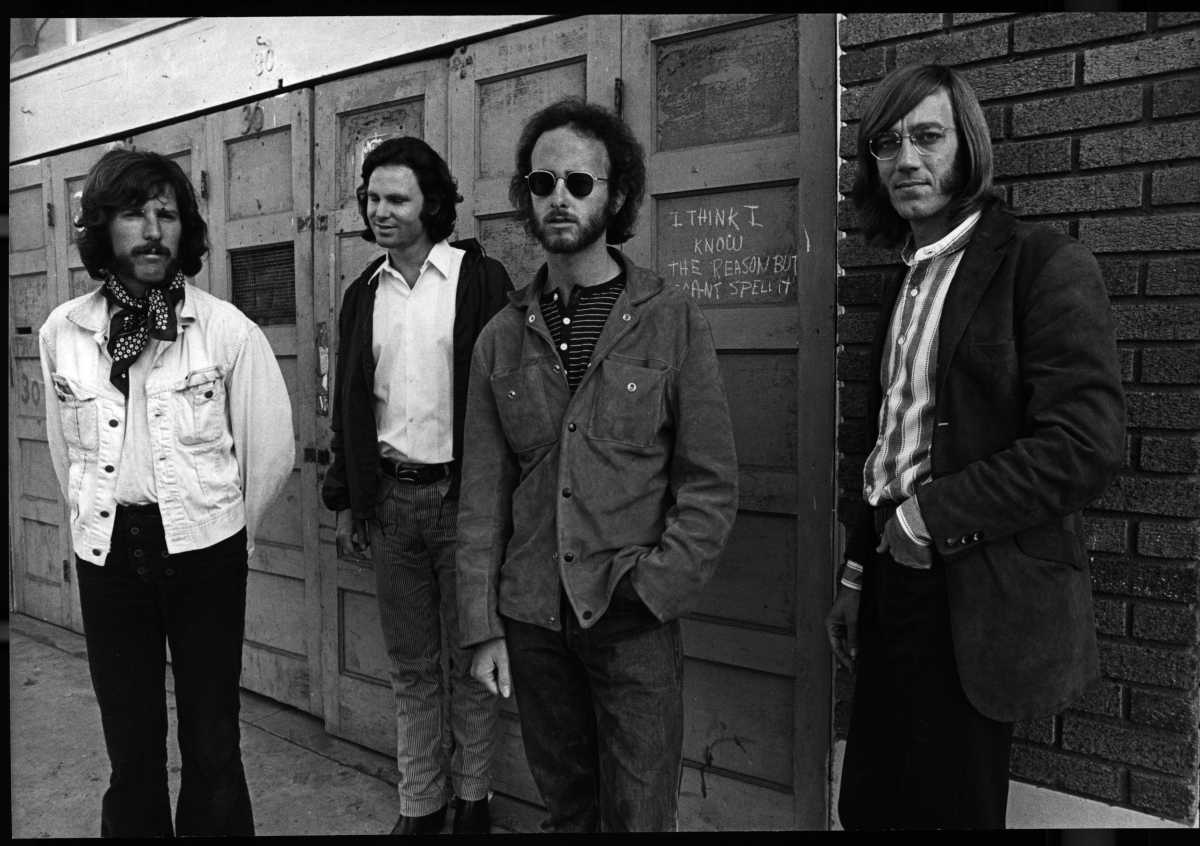 I’m not a huge Doors fan but I do like some of their songs…this one I really like.

This song was the title track to the Door’s last album with Jim Morrison released in April 1971. The remaining members released two more albums, Other Voices and Full Circle, which both sold poorly.

The Doors performed this live only once, in Dallas at the State Fair Music Hall on December 11, 1970. The only live recording of this is on the bootleg If It Ain’t One Thing, It’s Another. The band wanted to bring more musicians along to simulate the studio sound, but Morrison died before they could launch the tour.

This song wasn’t released as a single. The album peaked at #9 in the Billboard Album Charts in 1971.

Keyboardist Ray Manzarek: “A song about driving madly down the LA freeway – either heading into LA or going out on the 405 up to San Francisco. You’re a beatnik on the road, like Kerouac and Neal Cassady, barreling down the freeway as fast as you can go.”

“Mr. Mojo Risin'” is an anagram for “Jim Morrison.” He repeats the phrase at the end of the song faster and faster to simulate orgasm. Early blues musicians often referred to their “Mojo,” like in the Muddy Waters song “Got My Mojo Working.”

A mojo is a Hoodoo charm, usually a bag filled with items like roots, lodestone, rattlesnake rattles, alligator teeth, charms, coins – whatever does the trick. Different bags would be used for different purposes: If the bag were red, it would be a mojo for love and you would have to put a personal item, such as hair or bit of clothing in order for the mojo to work. If the mojo were made out of a black bag it would be for death. Many white listeners, including Jim Morrison, thought mojo meant sexual energy, and that is how it’s usually interpreted today, in part due to Austin Powers movies.

Morrison recorded his vocals in the studio bathroom to get a fuller sound. He spent a lot of time in there anyway because of all the beer he drank during the sessions.

The Doors needed extra musicians to record this. Jerry Sheff (famous for his work with Elvis Presley) was brought in to play bass, Marc Benno to play guitar. Sheff and Benno were going to tour with the band, but Morrison’s death canceled those plans.

Morrison got the idea for the “City of Night” lyric from John Rechy’s 1963 book of the same name. The book describes a sordid world of sexual perversion, which Morrison translated to Los Angeles.

They put this together in the studio and recorded it live with no overdubs. It came together surprisingly well. Guitarist Robby Krieger has called it “the quintessential Doors song.”

The first line, “Well, I did a little down about an hour ago,” is a reference to a barbituate, specifically Rorer 714.

Billy Idol covered this on his 1990 album Charmed Life, his version hitting #52 in the US. Idol was in the 1991 Oliver Stone movie The Doors, but had to take a smaller role because of a 1990 motorcycle accident that limited his mobility.

At a press conference to promote the album, Idol explained that he had been playing “L.A. Woman” for years and was a big fan of the song. He would often use it to audition new band members.

The Doors produced this album with Bruce Botnick. Paul Rothchild, who produced their first five albums, did not want to work on this because he didn’t like the songs. He produced an album for Janis Joplin instead.

In 2000, the surviving members of the Doors taped a VH1 Storytellers episode with guest vocalists filling in for Morrison. Perry Farrell, formerly of Jane’s Addiction, sang on this.

Doors drummer John Densmore said in the The Story of L.A. Woman documentary: “The metaphor for the city as a woman is brilliant: cops in cars, never saw a woman so alone – great stuff. It’s metaphoric, the physicality of the town and thinking of her and how we need to take care of her, it’s my hometown.”

Ray Manzarek put his UCLA film studies to use when he made a video for this song that was issued on a collection of Doors material called R-Evolution in 1985. To make the video, Manzarek combined archive footage of the band with new material he shot in Venice Beach, California. The actress Krista Errickson stars as the “LA Woman”; the male lead is John Doe of the band X – Manzarek produced their first four albums and directed two of their videos.

Well, I just got into town about an hour ago
Took a look around, see which way the wind blow
Where the little girls in their Hollywood bungalows

I see your hair is burnin’
Hills are filled with fire
If they say I never loved you
You know they are a liar
Drivin’ down your freeways
Midnight alleys roam
Cops in cars, the topless bars
Never saw a woman
So alone, so alone
So alone, so alone

Well, I just got into town about an hour ago
Took a look around, see which way the wind blow
Where the little girls in their Hollywood bungalows