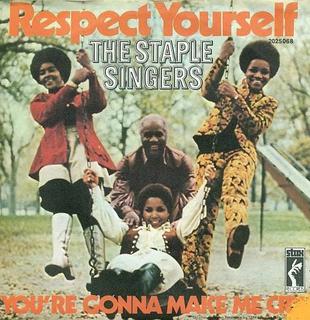 The last time I saw Bob Dylan, Mavis Staples opened up the show. She gave a great performance and just knowing the history she represented was incredible. I remember the song “I’ll Take You There” when I was a kid but didn’t really start listening to the Staple Singers until I saw them on the Last Waltz playing The Weight.

The first two Stax albums The Staple Singers recorded were with Steve Cropper of the Stax house band, but by August 1971, when they recorded “Respect Yourself,” they were working with the Muscle Shoals Rhythm Section at their studios in Alabama.

At this time, the Staple Singers were recording what they called “message music,” and ads for the Be Altitude: Respect Yourself album billed it as “The message that rock music is still looking for.”

The Staple Singers signed with the Memphis Soul label Stax Records in 1968, where they found success after languishing at Epic. “Respect Yourself” was written by the Stax songwriter Mack Rice and one of their artists, Luther Ingram, who is best known for his song “(If Loving You Is Wrong) I Don’t Want to Be Right.” They wrote the song after a discussion where Ingram said to Rice, “Black folk need to respect themselves.” Rice decided to turn the idea into a song, and quickly cut a demo. He didn’t think it was right for The Staple Singers, but Stax vice-president Al Bell did, stating, “I heard that lyric and I heard that melody and I said, ‘that’s it. This is the song I’ve been waiting on.'”

They slowed down the tempo of Rice’s demo and did a lot of experimenting in the studio. Terry Manning, who engineered the session, said: “It was kind of like all or nothing. We consciously put majors and minors together and rock and blues together. It was a lot of elements trying to fuse together, purposely putting little high tinklely sounds to catch kids’ ears, and just seeing if it would work.”

In the liner notes to the 2011 remaster of the Be Altitude: Respect Yourself album, Stax biographer Rob Bowman points out some of the things to listen for in this song:

Roger Hawkins using the rim of his snare and a wet-to-dry sound on the hi-hat.
A fuzzed electric guitar line that gets louder as the song fades out at the end. This was supposed to have a subliminal effect on the listener.
Mavis Staples blasting into the words “big ole man” at the end of the second verse.
The scat singing on two 4-bar sections, which was written as horn lines. On the demo, Mack Rice did the scatting to show where the horns would be, but The Staples sang it anyway, and the results were so good they decided to leave it in.

The very first Soul Train dance line was to this song. The show went on the air in 1971, but the famous segment where dancers showed off their moves grooving down the line didn’t start until five episodes in, when host/creator Don Cornelius realized the dancers were the big draw.

If you disrespect anybody that you run in to
How in the world do you think anybody’s s’posed to respect you
If you don’t give a heck ’bout the man with the bible in his hand, y’all
Just get out the way, and let the gentleman do his thing
You the kind of gentleman that want everything your way, yeah
Take the sheet off your face, boy, it’s a brand new day

If you’re walking ’round think’n that the world owes you something ’cause you’re here
You goin’ out the world backwards like you did when you first come here yeah
Keep talkin’ bout the president, won’t stop air pollution
Put your hand on your mouth when you cough, that’ll help the solution
Oh, you cuss around women and you don’t even know their names, no
Then you’re dumb enough to think that’ll make you a big ol’ man

7 thoughts on “Staple Singers – Respect Yourself”