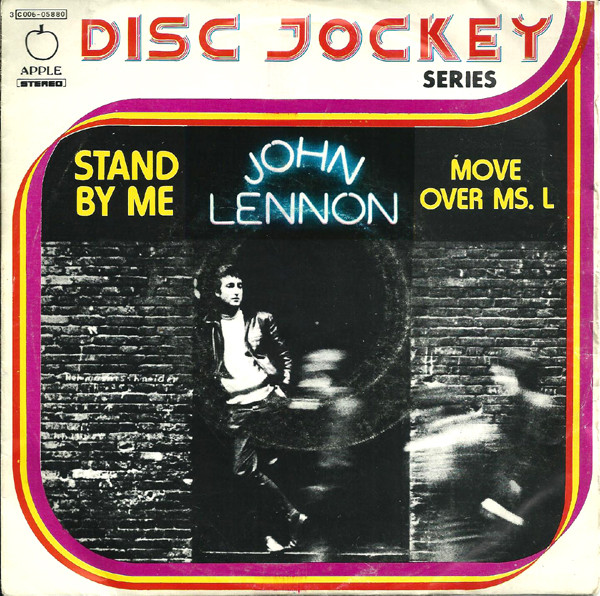 This is the version I like best…and I love Ben E. King’s version. I think it’s the reverb and John’s voice that makes this one the one I listen to the most.

“Stand By Me” was the name of a gospel hymn written by the Philadelphia minister Charles Albert Tindley in 1905. His hymn became popular in churches throughout the American South and was recorded by various gospel acts in the 1950s. The most popular adaptation was by The Staple Singers, who recorded it in 1955. It was this version that Ben E. King heard; he pushed The Drifters to record it, but the group’s manager rejected it.

Ben E. King, Jerry Leiber, and Mike Stoller wrote the song based off the old hymn.

Ben E King:  “David Ruffin from the Temptations did a great version of it. And, of course, the one that held up in my head the most was John Lennon’s version. He took it and made it as if it should have been his song as opposed to mine.

Ben E. King recorded this shortly after leaving The Drifters in 1960. It gave him a solid reputation as a solo artist.

After leaving The Drifters, King auditioned for the wildly successful songwriting/production team of Jerry Leiber and Mike Stoller, singing a few popular songs before doing what he had of “Stand By Me,” which was just a few lines of lyrics with some humming to fill in the words. He agreed to collaborate on the song with Leiber and Stoller, who gave it a more contemporary sound and polished it into a hit. The bassline at the beginning was Stoller’s idea.

The song was credited as being written by Leiber, Stoller and King. Charles Albert Tindley, who composed the original hymn, was left off the composer credits as his work had been sufficiently transformed. This wasn’t the first time Tindley was omitted from the credits of a song he originated: he also wrote “I’ll Overcome Someday,” which eventually became “We Shall Overcome.”

In an interview with the TV station WGBH, Jerry Leiber explained: “Ben E. is not a songwriter, he’s a singer, he might have written two songs in his whole career. I would guess that this comes out of church. The whole ‘stand by me’ and the way the release takes out, it sounds like a gospel-type song.”

This was used in the 1986 movie of the same name starring River Phoenix. The film was based on a short novel by Stephen King called The Body, but that title was a little to gruesome for a movie hoping to appeal to a wide audience.

Rob Reiner, who directed the film, met the song’s co-writter Mike Stoller at a party, and convinced him to play some of his classic songs on a piano while Reiner sang along. Months later, Reiner got the idea to use “Stand By Me” as the title and incorporate it into the movie when he heard the song at his house. This played up the friendship of the young boys in the film and downplayed the role of the dead body they find, which was a good move at the box office. The movie was a hit and propelled the song back to the charts, introducing the track to a new generation.

When this was first released in 1960, it charted US #4 and UK #27. When it was re-released to coincide with the movie, it hit US #9 and UK #1. Now a hit with two generations, the song started showing up at weddings and other special occasions, becoming a timeless classic.

The movie Stand By Me is set in 1959 – a little before this song was released, but pretty close. When Rob Reiner asked to use the song, its composers Leiber and Stoller thought he would want to re-record it with a contemporary artist like Tina Turner, but Reiner wanted the original so it fit the era. It was surprising then when the song vaulted up the charts, since it was the exact same song released in 1961.

According to BMI, this was the fourth most-played track of the 20th Century on American radio and TV.

This song has made an astounding nine appearances on the US Hot 100, plus two more that “bubbled under.” Here’s the breakdown:

Dionne Warwick sang backup on this song as part of a trio known as The Gospelaires. Soon after, songwriter Burt Bacharach helped Warwick launch a successful solo career.

This was not released on an album until it had been out as a single for two years.

Cassius Clay (who would later change his name to Muhammad Ali) recorded this in 1963 on an album called I Am The Greatest!. In 1964, when he beat Sonny Liston to become the heavyweight boxing champ, Clay’s version of “Stand By Me” was released as a single, with his spoken-boast song called “I Am The Greatest” as the flip side. The single made the Billboard charts, bubbling under at #102 on the Hot 100.

During an interview with Spinner UK,  Now there’s a [Dominican] singer named Prince [Royce] – he has a version out there that I think is brilliant. And then there’s Sean Kingston, with ‘Beautiful Girls’ [chuckles] – that’s another one that did well. So many of them have done well. As a songwriter, it pleases me a lot – you don’t always have a chance to write a song that people can relate to.”

The Bachata singer Prince Royce released a cover of this song (with mostly Spanish lyrics) in 2010 as his first single. Royce had been selling cell phones in New York City when he started shopping his demo CD around. When he got little reaction to the songs he wrote, he decided to record one that was familiar, and he chose “Stand By Me” because it was one of his favorite songs. The ploy worked, as it garnered attention and jumpstarted his career.

In England, this was used in commercials for Levi’s jeans in 1987 before the movie was released there. The exposure helped lift the song to #1 UK. “When A Man Loves A Woman” by Percy Sledge, used in the same group of Levi’s ads, went to #2 at the same time.

Budweiser used a version of this song by Skylar Grey in a commercial that aired during the 2018 Super Bowl between the Philadelphia Eagles and New England Patriots. The spot shows the beermaker’s plant in Cartersville, Georgia transforming to process water as part of disaster relief efforts in the wake of hurricanes and wildfires.

This has been played at countless weddings, but none more prominent than the royal wedding between Prince Harry and Meghan Markle on May 19, 2018. Before exchanging their vows in Windsor Castle, Karen Gibson and The Kingdom Choir performed a stirring gospel rendition of the song, which was chosen by the couple.

An ambient version by the artist Bootstraps (Jordan Beckett) got the attention of music supervisors and landed a number of placements, including the Power Rangers movie (2017) and episodes of MacGyver, Lethal Weapon and Hawaii Five-0.

Bootstraps included the song on his 2016 album Homage at the last minute. In a Songfacts interview, he explained why it works so well in visual media. “A lot of my songs that have done really well in the sync world are pretty linear – they don’t have these big, huge chorus hits,” he said. “‘Stand By Me,’ which has hands down been the biggest sync song I’ve done, has no kick drum. It has a lot of atmospherics, and the chorus is kind of slowly growing into a swell. So it’s really good for an editor, and that’s just the pragmatics of TV and film.”

If the sky that we look upon
Should tumble and fall
And the mountain should crumble to the sea
I won’t cry, I won’t cry
No I won’t shed a tear
Just as long as you stand, stand by me