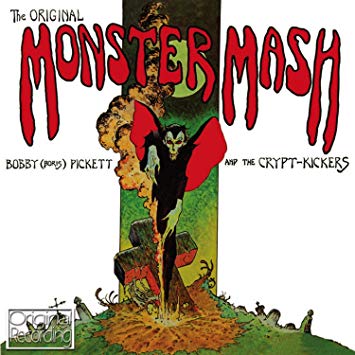 This song was banned by the BBC from their airwaves in 1962 for “being too morbid.”…Really BBC?

Elvis Presley had no sense of humor about this song…he was not a fan and called it the dumbest record he ever heard… this coming from the man who sang Clambake…but I still love Elvis.

Pickett and Lenny Capizzi wrote this song in about two hours. They recorded a demo to tape and brought it to Gary Paxton, lead singer of The Hollywood Argyles (“Alley Oop”). They recorded the song with Paxton and studio musicians Leon Russell, Johnny McCrae and Rickie Page, who were credited as “The Cryptkickers.” Paxton, who is credited as the song’s producer, also added the sound effects.

Paxton put the song out on his Garpax label and distributed it to radio stations around Southern California. The response was overwhelming, as the stations saw their phone banks lighting up with requests for the song. A deal was struck with London Records, who distributed the song worldwide.

Pickett was a nightclub entertainer who performed with a group called The Cordials. He wrote “Monster Mash” with his friend Lenny Capizzi. They were both big horror movie fans, and Pickett would do an impression of the actor Boris Karloff (known for playing the monster in many Frankenstein movies) during the speaking part of “Little Darlin'” that went over well in his act. As Capizzi played the piano, he and Pickett put together this song with his Karloff impression in mind. They came up with the plot about Frankenstein’s monster starting a dance craze.

The lyrics are based on the story of Frankenstein, which started as a 1818 novel by Mary Shelley and evolved into various film adaptations. In the story, Dr. Frankenstein creates a creature who comes to life, but what he created is a monster. The book is sober tale of regret and unexpected consequences, but the story is often played for comedy. In this song, the monster throws a big dance party, which is enthusiastically attended by many other creatures of lore (Dracula, Wolfman).

Pickett is imitating Boris Karloff, but is narrating the story as Dr. Frankenstein, not the monster that Karloff famously portrayed.

This is a dance song based on the “Mashed Potato” dance craze, which is where The “Mash” in the title comes in.

The original title was “Monster Twist” in an attempt to jump on the Twist craze, but that fad was fading so they tried calling it “Monster Mashed Potato,” then settled on “Monster Mash.”

The coffin being opened was made by pulling a rusty nail out of a lump of wood with the claw of a hammer.

The bubbling sounds came from blowing through a straw in a glass of water.

The sound of the chains was made by dropping chains onto plywood planks on the record studio floor.

This is arguably the most successful novelty song of all time. Bobby Pickett accomplished the rare feat of reaching the top 100 music chart three times with the same song. On October 20, 1962, the original release hit #1 in the US. The song re-entered the Billboard Hot 100 on August 29, 1970 peaking at #91, and then again on May 5, 1972 when it went all the way to #10. The song has sold over four million copies and continues to be a Halloween favorite.

The song made little impact in the UK until it was re-released there in 1973 and reached #3 on the Singles chart. By this time Boris Pickett was a 32-year-old part time New York cab driver.

Pickett quickly followed up this song with “Monsters’ Holiday,” where the monsters throw a mischievous Christmas party. The song, which was written by Paul Harrison of “Itsy Bitsy Teeny Weeny Yellow Polka Dot Bikini” fame, did well, reaching #30 and giving Pickett back-to-back holiday hits in 1962. The following year, he reached #88 with “Graduation Day,” his first entry that wasn’t a novelty song. “The Monster Swim” reached #135 in 1964, which was his last chart appearance until the “Monster Mash” re-issues.

This has been used in several TV shows, including Cheers, The Simpsons and Happy Days. It’s also been used in the movies Halloween III and Sweetheart’s Dance. In 1995, Monster Mash: The Movie was released, starring Pickett as Dr. Frankenstein.

Boris Karloff loved this song. He performed it on a special Halloween edition of the variety show Shindig! on October 30, 1965.

Artists who have covered this song include The Beach Boys (on their first live album – Beach Boys Concert, released in 1964), Misfits, Mannheim Steamroller and Sha-Na-Na. >>

Pickett was diagnosed with leukemia in 2000 and died in 2007. In his autobiography Monster Mash: Half Dead In Hollywood, he wrote: “Gone is that conditioned, morbid fear of physical death. I feel that psychological death is much more grueling and painful. Besides, to quote the great Bela Lugosi as Dracula, ‘To be dead… to be really dead… that must be glorious!’ Poor guy. A vampire’s half-life must really suck.”

Around Halloween in 2004, Pickett re-recorded the song as “Monster Slash.” The new version was a protest against President George W. Bush and his support for logging, mining and other environmental policies Pickett felt were harmful. Sample lyric: “The guests included big timber, big oil, mining magnates and their sons.”

Darlene Love, who sang the holiday favorite “Christmas (Baby Please Come Home),” claims that she was one of the backing singers on this track, which is plausible as she was one of the most popular session singers at the time. Love occasionally performed the song at Bette Midler’s Halloween shows.

When a novelty song becomes a surprise hit, a hastily produced album typically follows (see: “Pac-Man Fever”). In this case, the album was called The Original Monster Mash and included songs like “Blood Bank Blues,” “Graveyard Shift,” “Transylvania Twist,” “Me And My Mummy” and “Irresistible Igor.”

Pickett extended the “Monster” brand throughout his career. In 1970, he released “Monster Man Jam,” 1973 saw “Monster Concert,” and in 1984 he released the inevitable “Monster Rap.”

Also an actor, Pickett made appearances on T.J. Hooker, Bonanza and The Beverly Hillbillies, and played Dr. Frankenstein in the 1995 film Monster Mash: The Movie, which also starred Candace Cameron and Jimmie Walker.

“Monster Mash” was the nickname of the professional basketball player Jamal Mashburn.

I was working in the lab, late one night
When my eyes beheld an eerie sight
For my monster from his slab, began to rise
And suddenly to my surprise

The zombies were having fun, the party had just begun
The guests included Wolfman, Dracula, and his son

The scene was rockin’, all were digging the sounds
Igor on chains, backed by his baying hounds
The coffin-bangers were about to arrive
With their vocal group, ‘The Crypt-Kicker Five’

Out from his coffin’, Drac’s voice did ring
Seems he was troubled by just one thing
He opened the lid and shook his fist and said
“Whatever happened to my Transylvania Twist?

Now everything’s cool, Drac’s a part of the band
And my Monster Mash is the hit of the land
For you, the living this mash was meant too
When you get to my door, tell them Boris sent you