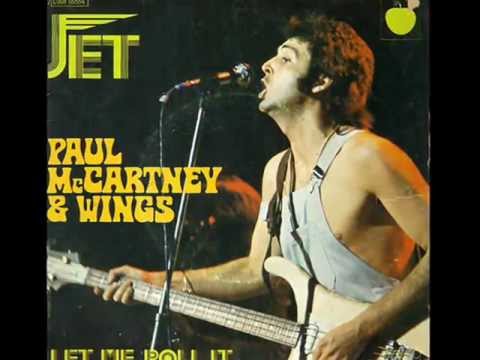 This song has been played a lot on radio and I try to stay away from posting songs like that but I still love it…and will turn it up when it comes on.

It was a terrific single…I like the B side (Let Me Roll It) as much as the A-side. Tony Visconti, who did a lot of production work for David Bowie and Thin Lizzy, did the orchestration on this song.

“Jet” was the name of a black Labrador that Paul McCartney and his wife Linda owned; the dog provided the title for the song. The McCartney’s owned a variety of animals, and at the time their brood included a Golden Lab named Poppy, a Dalmatian named Lucky, and the old Sheepdog Martha (from the Beatles song “Martha My Dear”). “Jet” was chosen not because he was Paul’s favorite, but because the name makes a very stadium-ready title, perfect for throwing your fist in the air when it’s performed in an arena. The song is really about freedom; McCartney did something similar when he used an amusement park ride as the title for a song about madness in “Helter Skelter.”

Paul’s wife Linda gave some clues to the thought process behind “Jet” when she said in 1976: “He wanted that one to be totally mad. Paul’s had a lot of practice in the studio. He’s done some very trippy things. Every now and then he remembers how much he loves it.”

Speaking with GQ in 2018, Paul McCartney told the story behind this song: “I was in a songwriting mood and I was up in Scotland. I just thought, OK, I just gotta go somewhere and try and write a song. We happened to have a little pony that was called Jet on the farm. I took my guitar and hiked up this great big hill. I found myself a place which was in the middle of nature, and just sat there and started making up a song.

I don’t know where all the words came from. Well I know where ‘Jet’ came from – I liked the name. The words are probably about me and my father-in-law. The early days of getting married and when your father-in-law is kind of a nuisance. He’s probably the ‘Major’ in it but it’s only a song so you kind of work your things out.

That one was written halfway up a mountain in Scotland, then recorded in Nigeria. I was wondering where to record and I fancied getting out of England, so I asked my record label which is EMI to supply me with a list of all the studios they had around the world – I knew they had a lot. One was in China, one was in Rio de Janeiro and one was in Lagos, Nigeria. So, I went, Yeah Lagos, come on, because I like African music a lot. I love the rhythms of African music so I chose that not realizing that it would be a really basic little studio. We kind of built half the studio. They didn’t have a vocal booth, so we had to explain to them: you take some wood, you get some glass and you put it in like that. So we built the vocal booths. But it was kind of nice, I liked the primitive aspect of it and being in Africa was a pretty interesting experience.”

It’s possible to read a deep meaning into the lyrics, “I thought the Major was a lady suffragette,” but David Bowie’s song Suffragette City was released the previous year, and it’s likely the word “suffragette,” which is a term for a woman fighting for the right to vote, was floating around in McCartney’s mind.

Linda McCartney was an official member of the band, and she was often maligned in the press as being dead weight. Her contributions on stage were rarely pronounced, which was probably the way the audio engineers mixing the shows liked it, but on live performances of this song you can kind of hear her playing the Mellotron if you listen carefully.

The Australian rock band Jet got their name from this song. McCartney and The Beatles were a big influence on them.

This was released as a single with “Mamunia” as the B-side, but three weeks later “Let Me Roll It” replaced it.

(Jet, Jet)
(Jet) I can almost remember their funny faces
That time you told them you were going to marrying soon
And Jet I thought the only lonely place was on the moon

And Jet I thought the major was a lady suffragette
(Jet, Jet)

(Jet, Jet)
And Jet you know I thought you was a little lady suffragette
(Jet)
A little lady
My little lady, yes