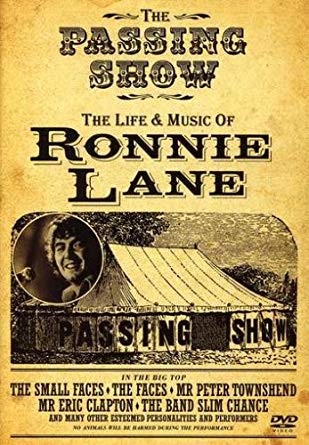 I didn’t know much about Ronnie Lane when I watched this documentary. It covers his childhood through his tragic death and the period after he left the Faces. He was loved by his peers and a talented musician and songwriter.

Ronnie’s mom had Multiple Sclerosis and Ronnie was in denial about himself until he was diagnosed with it. I didn’t know about the documentary until I ran across it on youtube.

I would recommend this to any music fan.

Ronnie Lane was a Britsh songwriter and bass player. He started with the Small Faces as the bass player and he and Steve Marriott wrote most of bands songs. The Small Faces never toured America so they never really broke out big. They did have 11 top twenty hits in the UK but only one in America with Itchycoo Park charting at #16.

Steve Mariott left the Small Faces in 1968 and Rod Stewart and Ronnie Wood joined Ronnie Lane, Kenney Jones, and Ian McLagan to start The Faces. The Faces released four albums between 1970-1973… First Step, Long Player, A Nod is as Good as a Wink…to a Blind Horse and Ooh La La. They were one of the top grossing touring bands.

After Rod Stewart’s solo career took off his interest in the band began to wane and in 1973 Ronnie Lane quit. After Ronnie left the Faces, they made no more studio albums.

Ronnie started his own folk-country band named “Slim Chance” and released a surprise hit single “Come On” in 1973 and it went to #11 in the UK. Ronnie had a unique idea of touring. His tour was called “The Passing Show” which toured the countryside with a circus tent and included a ringmaster and clowns.

In 1976 he owed a record company an album and he was in financial trouble. He asked Pete Townshend to help him record an album. The album was called “Rough Mix” and it was a very strong album with great reviews but the record company didn’t promote it and the sales were not great.

During the recording of “Rough Mix” Lane diagnosed with was Multiple Sclerosis. He still toured with Eric Clapton and others afterward and released an album in 1979 called “See Me.”