I did a post earlier on Infamous Rock and Roll Locations and I wanted to do a follow-up on it. If you don’t want to click on the link…I mentioned the Riot/Hyatt House, The Edgewater Inn, The Rainbow Bar and Grille, Villa Nellcôte, and Rodney Bingenheimer’s English Disco.

To be honest….a few are infamous but the other are just cool. I love reading rock music bios and there are some places I would love to visit one day. A warning though…a few are very morbid.

The Highland Gardens Hotel…Ok…this one is a little morbid…well a lot morbid. On October 4, 1970, Janis Joplin stayed here and it was called The Landmark Motor Hotel. She died in room #105 of a suspected heroin overdose. The same hotel stands but it’s called The Highland Gardens Hotel now. Yes, you can rent room #105. She lived there for months while working on her last album Pearl. The closet has handwriting by visitors but the rest of the room is normal. Yes, I would love to go.

Big Pink in Saugerties/Woodstock: This is the house where The Band and Bob Dylan recorded The Band’s debut album…Music From Big Pink…this house was pink then and is now. Now you can rent the house but you cannot go down to the basement where they recorded…what’s the fun in that?

The Whiskey is still open now. 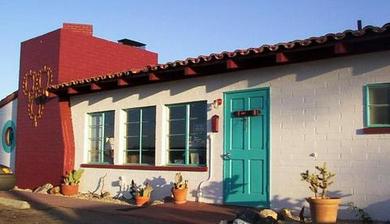 The Joshua Tree Inn – Another morbid one but I would stay there. On September 18, 1973, Gram Parsons purchased liquid morphine on that night from an unknown girl and died of an overdose. This all happened in Room 8 of this Inn. Yes, you can rent room 8 today in fact..it’s decorated with posters of Gram.

Mayfair…Curzon Square – This apartment was owned by Harry Nilsson at the time. It was in this building, in the same apartment that both Cass Elliot (Mama Cass) and Keith Moon died 4 years apart. Nilsson liked the location because it was near Apple Records and nightclubs. It was decorated by  ROR…Ringo and Robin (Ringo Starr and designer Robin Cruikshank).

On July 29, 1974 after a performance…Mama Cass died of a heart attack. In 1978 Keith Moon wanted to rent it from Nilsson but he was afraid to rent it again because Nilsson remembered what happened to Cass. He ended up talking to Pete Townshend and Townshend told him that  ‘lightning does not strike in the same place twice’ so he let Keith rent it. On September 7, 1978, Keith Moon died because of an overdose of clomethiazole…a prescription drug for combating alcoholism in the same bedroom.