Merry Christmas everyone… another year older…and a new one just begun.

This is my favorite Christmas song hands down. This song gets me in the Christmas mood like no other. The song is highly idealistic but that is alright. It was the early seventies and the time for idealism.

In 1969 John and Yoko had rented billboard spaces in 12 major cities around the world, for the display of black-and-white posters that declared “WAR IS OVER! If You Want It – Happy Christmas from John & Yoko”. Two years later this slogan became the basis for this song when Lennon decided to make a Christmas record with an anti-war message…plus John said he was sick of White Christmas. 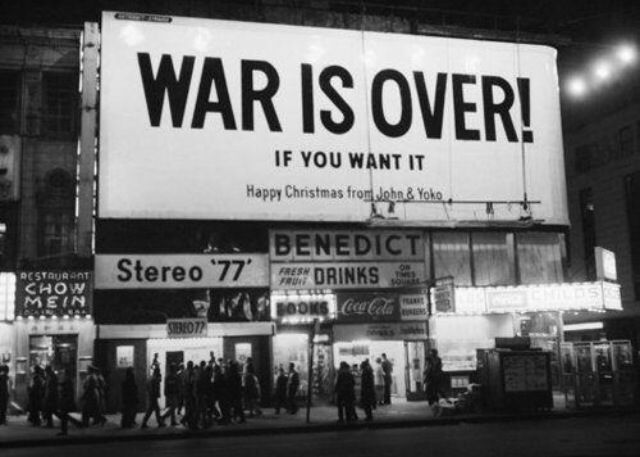 John Lennon and Yoko Ono wrote this in their New York City hotel room and recorded it during the evening of October 28 and into the morning of the 29th, 1971 at the Record Plant in New York. It was released in the US for Christmas but didn’t chart. The next year, it was released in the UK, where it did much better, charting at #2. Eventually, the song became a Christmas classic in America, but it took a while.

Lennon originally wrote this as a protest song about the Vietnam War, and the idea “that we’re just as responsible as the man who pushes the button. As long as people imagine that somebody’s doing it to them and that they have no control, then they have no control.”

This didn’t appear on an album until 1975, when it was included on Lennon’s Shaved Fish singles compilation. This is one of the first Lennon albums I bought.