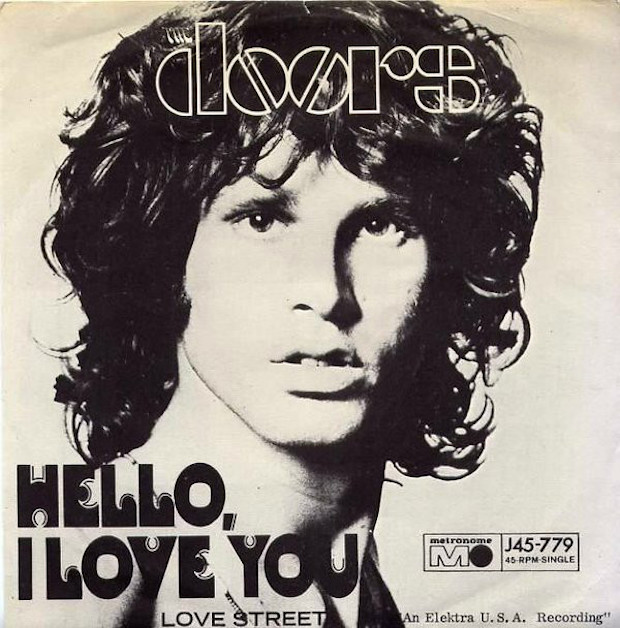 In my teens, I got into the Doors. It happened at just the right time because their popularity rose in the 1980s. When I heard this song after listening to their other music…I thought wow this is very radio-friendly for The Doors. Some fans called them a sell-out…saying it was too top 40 which I don’t think is right…not their best song but a good one. Every song cannot have lyrics like “Don’t chase the clouds pagodas” in them.

I liked it and still do and I heard The Kinks All Day and All of the Night in the song. I wasn’t the only one that heard it. Morrison admitted it and would pay Ray Davies royalties after it hit. Morrison wrote this after seeing a beautiful woman in 1965 walking down a California beach. I also read that he helped popularize the pickup line…” Hello, I love you. Won’t you tell me your name?”  that probably hasn’t worked for anyone…ok maybe Jim.

This song was on their demo to shop for a record deal…I have it at the bottom of the post. They didn’t put it on an album until 1968 when they needed material for their third album Waiting for the Sun. They needed more material for that album and pulled up this one from their original demo to re-record it. Although you can hear the Kinks in there… Krieger and Densmore borrowed the finished version’s rhythm from Cream’s Sunshine of Your Love. Robby Krieger also ran his guitar through a fuzz box to get a distorted effect like Cream’s “Sunshine Of Your Love.”

I always liked Ray Davies’s response to the song’s similarities to his All Day and All of the Night.

Ray Davies: “The funniest thing was when my publisher came to me on tour and said The Doors had used the riff for ‘All Day And All Of The Night’ for ‘Hello, I Love You.’ I said rather than sue them, can’t we just get them to own up? My publisher said, ‘They have, that’s why we should sue them!’ (laughs) Jim Morrison admitted it, which to me was the most important thing. The most important thing, actually, is to take (the idea) somewhere else.”

This would be the Door’s last #1 song…Light My Fire is the first one. The R.E.M. song “Pop Song ’89” is a play on this. Instead of talking about sex, they talk to the girl about politics and the weather. This song was also used in the movies Platoon, Casualties of War, and Forrest Gump.

The demo of Hello, I Love You.

Hello, I Love You