An awesome blues song that shows what Boz Scaggs was all about before the hits came. He had been playing with Steve Miller and in 1969 he made this self-titled album Boz Scaggs. He spent some time down south getting this together. He also made a self-titled album (Boz) in 1967 and released it in Europe for the record.

Jann Wenner, the founder of Rolling Stone magazine, was producing Boz’s first U.S. solo album, and he took him to Jerry Wexler at Atlantic Records, who suggested recording in the South. They had a choice of studios…Stax in Memphis, Phil Walden’s studio in Macon, or Muscle Shoals Sound, a new studio founded by the rhythm section from FAME Studios. Boz and Jann listened to everything that was coming out of those studios and they soon knew they wanted the Muscle Shoals Rhythm Section, and they wanted Duane Allman. 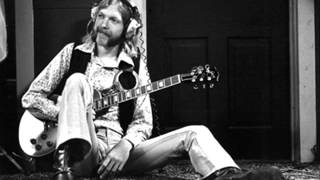 Boz didn’t know a lot about Duane, but he got a good sense of his stature by spending that week with him at Muscle Shoals Sound. Duane’s work with Wilson Pickett and Aretha Franklin had preceded him, but Boz was most struck by who Duane was to the players at the studio. They lit up when Duane walked in the room…their respect for him was clear.

Boz Scaggs: “Duane had a profound effect on that album. One of the real revelations to me was Duane’s character, seeing him in the South hanging out with those guys. In his appearance, he looked like he was from New York or L.A., with long hair. It was a brave statement in itself in redneck America. You could get in trouble just driving around in his car. It was an occasion and a homecoming. They held him in very high esteem. He was the dude. He was the natural leader, and he made everyone laugh. It was a side I didn’t see in Macon, where he was much more serious and focused.”

Duane set up his amp in the bathroom at the studio on this recording. He liked to do that so his guitar wouldn’t bleed through on the other instruments. This song has some of Allman’s best playing.

Scaggs and his girlfriend Carmella settled into Macon Georgia and were part of the Allman Brothers Band extended family for a time, enjoying the musical energy and experience in Macon. By this time Macon was host to a lot of different musicians. Boz went fishing and played poker with the Allmans late into the night, drinking beer, and telling stories.

This song is usually listed in the top 5 of Boz Scaggs’s songs. It is not as well known but a great blues track. The track was written by Fenton Robinson.

Boz Scaggs: “The first time we did it, it lasted twenty-five minutes and everyone thought it was such a gas, they trouped back in and did it again and we ended up with about forty minutes of ‘Loan Me a Dime’ and we wanted to use at least twenty minutes of it, but we had to use the shorter version, but that music is in the can somewhere in Muscle Shoals, and Duane was really rockin’ out.”

Loan Me A Dime

Somebody loan me a dime
You know I need.. I need a helping hand