Viva Las Vegas was written by Doc Pomus and Mort Shuman as the title song for the film of the same name starring Elvis Presley…. better-known AS…no I won’t go through that again. Pomus and Shuman wrote several other songs for Presley as well. Among them: “Little Sister,” “Suspicion,” and  “Surrender.”

In the movie, Elvis plays a race car driver who has to wait tables at a hotel in order to pay off a debt (no doubt to Colonel Tom Parker!). He performs this song at the hotel’s talent competition accompanied by various Vegas showgirls. Viva Las Vegas was the most successful of the 31 films Elvis starred in, returning more than $5 million to MGM Studios on an investment of less than $1 million. 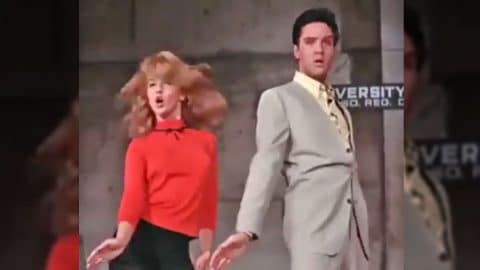 Billy Strange played guitar on this track. According to Strange’s son Jerry, musician’s royalties for the song came in for years thanks to slot machines that play the song.

Everything that is famous about Las Vegas comes up in the song…such as roulette, neon, hot dice, pretty women, blackjack, one-armed bandits, and bright lights. The song has served as an advertisement for the city although having a small consolation for losing everything…If I wind up broke up well
I’ll always remember that I had a swingin’ time… Oh OK! A swinging time is worth it!

The Dead Kennedys also did a cover of the song…in their own unique way.