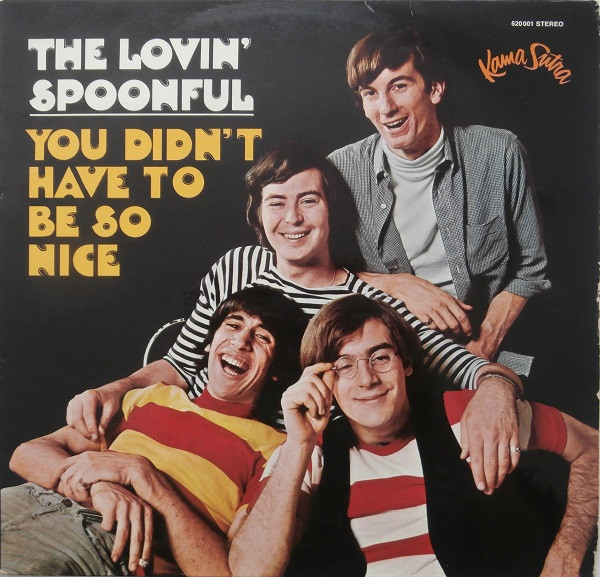 In the 1980s I really got into this band. I purchased one of their many greatest hits. I first heard of John Sebastian in the 70s when he wrote and sang the theme song of  TV show Welcome Back Cotter called “Welcome Back” which went to #1.

They were considered by TV producers to be in a television show but they were dropped over a conflict of song publishing rights. After an audition process, the producers figured it was more trouble than they expected. For one thing, the Spoonful were writing their own music at this point, and the show was not interested in giving up the publishing rights to the songs written for the show, so it really did not make sense for either party, and the producers instead turned to open auditions for the show. The Monkees were found soon after that.

Brian Wilson said this song influenced one of the Beach Boys’ best songs…God Only Knows. The group was only active from 1965 to 1968, which John Sebastian described as “two glorious years and a tedious one.” John Sebastian wrote the majority of their songs. He had a #1 hit as a solo artist in 1976 with “Welcome Back,” the theme song to the TV series Welcome Back, Kotter.

This song was written by John Sebastian and bassist Steve Boone.

Lovin’ Spoonful played what they called “jug band” music and like the Rascals, they were more of a singles band than an album band. In 1967 Zal Yanovsky left the band citing musical differences. In 1968 Sebastian left for a solo career and the band carried on until 1969 without a significant hit.

John Sebastian:  “We started off in a world of 45 singles, so our only game still was three minutes of heaven every time out. That was all. We thought of it as four-man Phil Spector music. We wanted it to have that big quality, but we didn’t want to hire the Wrecking Crew.”

“Our producer Eric Jacobsen understood something about this funny hybrid that we were working on,” “Things like the chimes on ‘You Didn’t Have to Be So Nice’ were our attempts at creating that kind of vibe: harmonica, slide whistles and penny whistles. I hate calling it folk-rock. They called The Byrds folk-rock and then they were too lazy to come up with something else for our band, but we weren’t really drawing from the Pete Seeger, Bob Dylan catalog. It was a time of a lot of seriousness, and a lot of fake seriousness and people talking about Important Things. And Loving Spoonful didn’t really go for that. We were just trying to entertain.”

You Didn’t Have To Be So Nice