This song is my favorite of the Flying Burrito Brothers. It came off their great country album The Gilded Palace of Sin.  It didn’t chart at the time. It probably would have helped if they would have given it a proper name but regardless… it’s a great song.

Parsons wrote this song with Burrito bass player Chris Ethridge while the band was living in their San Fernando Valley house that was dubbed “Burrito Manor.”

This song, like the album The Gilded Palace of Sin, barely made a dent on the music world of 1969. They did develop a cult following after this albums release that included Bob Dylan and The Rolling Stones. The band was more popular with other musicians than the public.

Gram joined the Flying Burrito Brothers after leaving the Byrds in 1968.

The Gilded Palace of Sin. One thing you notice are the “Nudie” suites on the front cover. Nudie Cohn was an American tailor who designed decorative rhinestone-covered suits. Parsons’ suit was hand-stitched by Manuel Cuevas, Nudie Cohen’s protégé, who has called the suit “a map for him to follow to his death.”

The green leaves featured in the design on the front of the jacket are a marijuana plant, and the red-petaled flowers above them are poppies, the natural source of morphine, opium, and heroin. Gram Parsons would die in 1973 and the cause of death was an overdose of morphine and alcohol 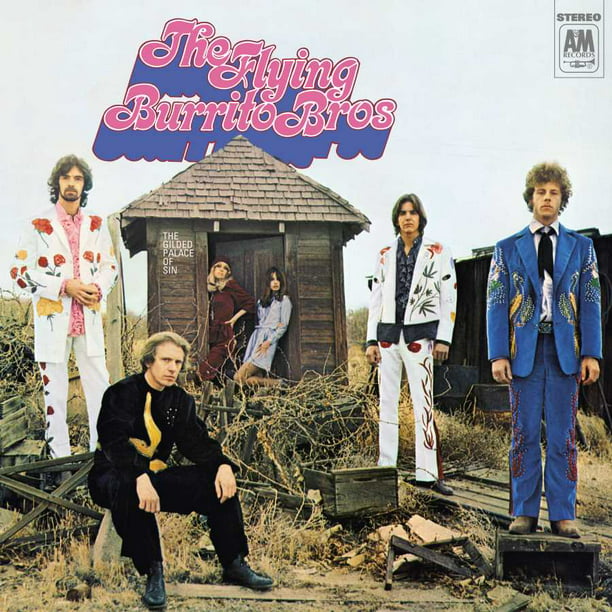 This album was a major influence on the Eagles, Travis Tritt, Vince Gill, Alan Jackson, Clint Black, and Randy Travis.