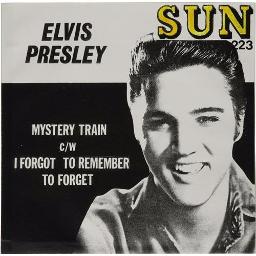 It’s been too long since I posted about the big E. How could someone, not like a song with a title like that?

Elvis didn’t want to record this song because he thought it was too Country, so drummer Johnny Bernero from Memphis was added to the mix. Up until this time, there was only Scotty Moore on guitar, Bill Bass on bass, and Elvis on rhythm guitar. This added an up-tempo beat…Elvis liked it and recorded the song, which became a Country hit. I know Elvis is Elvis, but his backing band was just as special to me. Scotty Moore was one of a kind.

This song was released twice. The Sun Records release first charted the following week (September 17, 1955) at #14 on Billboard’s Country Charts.  On November 21, 1955, it was released yet again. On that day RCA Victor purchased Elvis’s contract from Sam Phillips. As part of the deal, RCA obtained the rights to all of Presley’s Sun recordings. Soon after, RCA pressed and distributed a single of “I Forgot to Remember to Forget” and “Mystery Train” on its own label.

The Beatles never recorded this song in the studio, but they did it for the BBC with George singing lead.

The song was written by Charlie Feathers and Stan Kesler.  Kesler had already written Presley’s “I’m Left, You’re Right, She’s Gone” when he had the idea for this song.

Stan Kesler: “At that time, I was on the kick of catchy titles,” Kesler recalled. “When I began to think about that phrase, it just expanded into ‘I forgot to remember to forget her.’ From there, I started working on it, and it all fell together.”

The Beatles version… live in the BBC studios.

I Forgot To Remember To Forget

The day she went away
I made myself a promise
That I’d soon forget we ever met
Well, but something sure is wrong
‘Cause I’m so blue and lonely
I forgot to remember to forget

19 thoughts on “Elvis Presley – I Forgot To Remember To Forget”