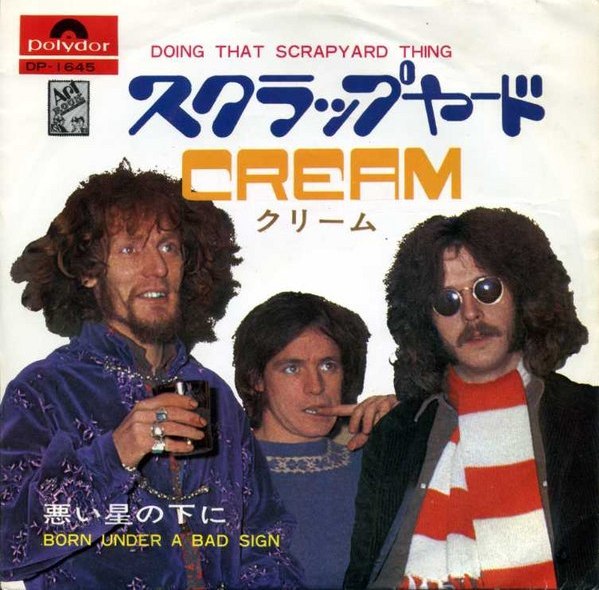 When I first started to listen to Cream, what stood out was not Clapton’s guitar or Baker’s drumming…no it was Jack Bruce’s bass. There are three bass players I listened to while starting out playing. John Entwistle, Jack Bruce, and Paul McCartney.  Those three covered the chaotic, the sliding, and melodic. Jack Bruce had all of these traits.

Cream recorded this and released it on their 1968 album Wheels Of Fire. It was written by Booker T Jones and William Bell for Albert King. King released it on his first Stax album Born Under A Bad Sign in 1967. Clapton stuck close to King’s guitar style on this song.

Cream played this when they were inducted into the Rock and Roll Hall of Fame on January 12, 1993, in tribute to Albert King, who died the previous year. It was one of two times the band has played together since they broke up in 1968. The first time was at Clapton’s wedding in 1979…three Beatles also played together at his wedding.

Booker T Jones: “My recollection is that we wrote it in my den, late the night before the session. We had been trying to come up with something for Albert. He was coming to town and it was the last opportunity we had to write a song. But you know, now that I think of it, the fact that the song was in D flat, there is definitely an Indiana influence because, you know, a blues song in d flat? I tell you, I learned the value of flat keys and sharp keys and how to use them for emotional value so I could have more range and capacity for touching the human heart. I think that was one of the reasons that song became as huge as it did. Because it was in D flat.”

When Albert King signed with Stax Records in Memphis, Booker T. Jones, who was a member of the Stax house band Booker T. & The MGs, was assigned his producer. In an interview with National Public Radio (NPR), Jones explained: “At that time, my writing partner was William Bell. He came over to my house the night before the session. William wrote the words and I wrote the music in my den that night. That was one of my greatest moments in the studio as far as being thrilled with a piece of music. The feeling of it, it’s the real blues done by the real people. It was Albert King from East St. Louis, the left-handed guitar player who was just one of a kind and so electric and so intense and so serious about his music. He just lost himself in the music. He’s such a one of a kind character. I was there in the middle of it and it was exhilarating.”

The “bad sign” is an astrology reference: if you’re “born under a bad sign,” it means the stars are aligned against you from birth. It was the song’s co-writer William Bell who came up with the title – he wanted to do a blues song about astrology.

Born Under A Bad Sign was Albert King’s first album released by Stax. It became King’s signature song, with the classic lyrics, “If it wasn’t for bad luck, I wouldn’t have no luck at all.”

The song harkens back to blues of the ’30s and ’40s which had similar lyrical content.

Their guitarist, Eric Clapton, idolized American blues artists and often performed their songs. It marked a change of guitar style for Clapton, who adopted a harder, attacking style on this song in place of the sweeter, sustaining notes he called “woman tone,” which were more apparent on Cream’s first two albums.

The Paul Butterfield Blues Band played this at Woodstock in 1969. They went on Monday morning, two sets ahead of Jimi Hendrix.

Jimi Hendrix and Buddy Miles, recorded an instrumental cover in 1969 as a tribute to King.

This song’s lyricist William Bell performed it at the Grammy Awards in 2017 with Gary Clark Jr. “When you spend your life making music, you were born under a good sign, Bell said when they finished the song.” Bell won the award for Best Americana Album.

I can’t read, haven’t learned how to write
My whole life has been one big fight
Born under a bad sign
I been down since I begin to crawl
If it wasn’t for bad luck
I say I wouldn’t have no luck at all

You know, wine and women is all I crave
A big-legged woman is gonna carry me to my grave
Born under a bad sign
I been down since I begin to crawl
If it wasn’t for bad luck
I tell I wouldn’t have no luck at all

Yeah, my bad luck boy
Been havin’ bad luck all of my days, yes