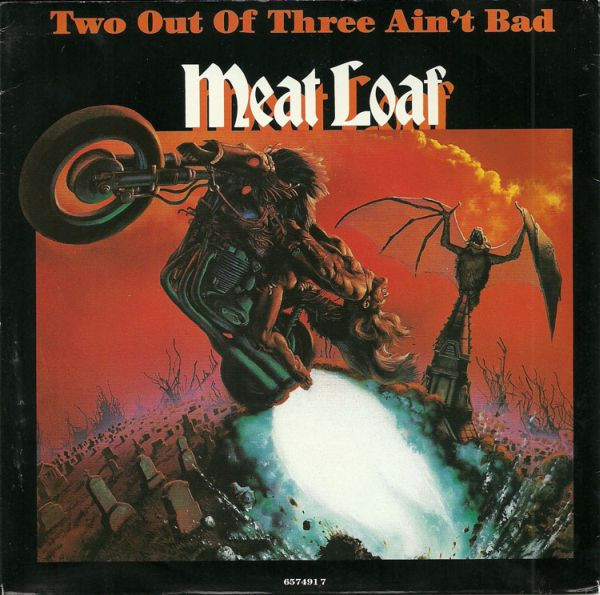 I had this one in my scheduled folder and heard the news this morning.

I grew up listening to AM radio with my sister and you couldn’t help but hear this song. When I found out he passed away at 74 years old I was saddened because he seemed like such a good guy.

He was a staple of late 1970’s radio. I was not the biggest fan but the guy was different and multitalented. I still watch the The Rocky Horror Picture Show once in a while and he is great in that.

He was born Marvin Lee Aday . There are many stories on how he got his nickname. His football coach, his dad, and one story I found…which I don’t believe goes like this. When he was a child, Aday was messing around with some friends, and he bragged that his head was so thick and strong that a Volkswagen could run over it and he’d be fine. Another kid said no way, that his head would “turn into meatloaf.” Supposedly Aday put his head on the ground and was run over but a volkswagon…and nothing happened.

Meatloaf 2016:  “I was born bright red, so the doctor suggested that they should keep me in the hospital for a few days. My dad actually spoke like this…” “’So, uh, I want you to name my son there ― because he looks like nine-and-a-half pounds of ground chuck ― I want you to put a name tag on the front of that plastic crib and it say ‘Meat’ on it.’”

Two Out Of Three Ain’t Bad is a good pop song and I still listen to it. Jim Steinman wrote this song after his friend, the actress Mimi Kennedy, suggested that he write a ballad along the lines of the Elvis Presley song “I Want You, I Need You, I Love You.” She was implying she was implying he write something simple but Steinman, as his other songs show, didn’t work that way.  This is one of the most straightforward Steinman songs that I know about.

Todd Rundgren produced the album. On this song, he used the other three members of his band Utopia: Kasim Sulton on bass, Willie Wilcox on drums, and Roger Powell on synthesizer. Rundgren played guitar and also sang backup on this song.

I found a story a few years ago about where he was when JFK was assisinated. He was at Parkland Hospital when JFK arrived. I have the video down below of him telling the story…listen if you have time…it’s very interesting.

Jim Steinman, who was Meat Loaf’s songwriter, turned the saying into a song about the elusive nature of love. The song begins with Meat Loaf getting kicked to the curb by his girl, presumably because he won’t tell her he loves her. He makes the case that even though he will never love her, he’s good enough, since after all he does want her and need her, and happy endings are only for fairy tales.

We then learn that his commitment issues step from a previous relationship – one with the only woman he will ever love. She once left him with the same explanation: I want you, I need you, but I’ll never love you.

In America, this was the second single released from the Bat Out Of Hell album. The first single, “You Took the Words Right Out of My Mouth,” didn’t chart, but by the time “Two Out of Three” was issued in March 1978, the album was picking up steam and the song rose up the charts, peaking at #11 on July 8.

This song got a big boost when Meat Loaf performed it on Saturday Night Live on March 25, 1978.

Two Out Of Three Ain’t Bad

There’s only one girl that I have ever loved
And that was so many years ago
And though I know I’ll never get her out of my heart
She never loved me back, ooh I know
I remember how she left me on a stormy night
She kissed me and got out of our bed
And though I pleaded and I begged her
Not to walk out that door
She packed her bags and turned right away