Peter Falk, later of Columbo, is in this episode of the Twilight Zone. He plays a  caricature of Fidel Castro. The episode plays heavily on paranoia…especially in the situation of one Ramos Clemente (Peter Falk)…where he questions who to trust. He overtakes a small Latin nation and the former General De Cruz (Will Kuluva) tells him of a certain mirror that will show Clemente his future assassins.

One of the highlights to me was the dialog between De Cruz and Clemente. De Cruz has seen this all before. He knows what’s going to happen and what is going through Clemente’s mind because he has been there. Once Clemente gets power he starts turning into what he was fighting against. All of his loyal comrades are seeing it and try warn him.

The Bay of Pigs happened around 6 months before this episode aired.

“This is the face of Ramos Clemente, a year ago a beardless, nameless worker of the dirt, who plodded behind a mule furrowing someone else’s land. And he looked up at a hot Central American sun, and he pledged the impossible. He made a vow that he would lead an avenging army against the tyranny that put the ache in his back and the anguish in his eyes. And now one year later, the dream of the impossible has become a fact. In just a moment, we will look deep into this mirror and see the aftermath of a rebellion – in The Twilight Zone.”

When the peasant Ramos Clemente leads a successful revolution in his undefined country, the former dictator General De Cruz advises that his mirror is magic and can anticipate who will murder him. Clement becomes paranoid and kills each one of his revolutionary comrades believing that they want to murder him. 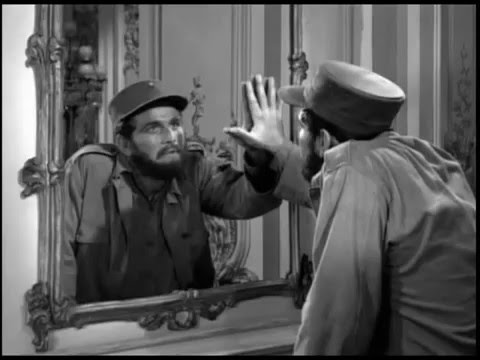 Sorry I could find no video preview of this episode.

“Ramos Clemente, a would-be god in dungarees, strangled by an illusion, that will-o’-the-wisp mirage that dangles from the sky in front of the eyes of all ambitious men, all tyrants – and any resemblance to tyrants living or dead is hardly coincidental, whether it be here or in the Twilight Zone.”

15 thoughts on “Twilight Zone – The Mirror”