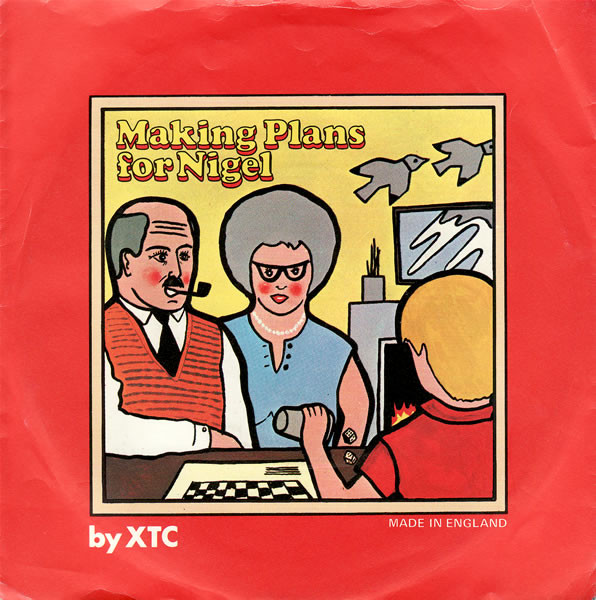 I got into XTC late into the game. I didn’t get to know them until they released I’m The Man Who Murdered Love. I liked this song right away because it has a nice power pop sound. The drums stand out on this song.

This song was XTC’s breakthrough single released in 1979. It was written by bassist Colin Moulding, who shared vocal and songwriting duties with guitarist Andy Partridge. It was on the third, breakthrough, album Drums And Wires.

The lyrics are told from the point of view of parents who are certain that their son Nigel is happy in his work, affirming that his future in British Steel “is as good as sealed”, and that he “likes to speak and loves to be spoken to”. As a response to the song, British Steel reportedly gathered four Sheffield employees
named Nigel to talk about job satisfaction for the trade publication Steel News.

From Wiki: The first 20,000 pressings of the single came in a fold-out cover that created a fully playable gameboard of “Chutes and Ladders” adapted to details of Nigel’s “miserable life”, including the purchase of a scooter, job interviews, a holiday in Spain and an engagement to “a very nice girl.” There were two versions of the gameboard, one to be played by Nigel and the other to be played by his parents. As credited on the back cover, the illustrator was Steve Shotter and sleeve design was by Cooke Key.

“Partly biographical, this one. My dad prompted me to write it. He wanted a university future for me and was very overpowering in trying to persuade me to get my hair cut and stay on at school. It got to the point where he almost tried to drag me down the barber’s shop by my hair. I know the song tells of a slightly different situation, but it all boils down to the same thing – parental domination.”

There were no Nigels at school. I wasn’t bullied, but I think I had a natural empathy for people that were. ‘Nigel’ was my song for the bullied, I suppose.

“British Steel was just a bit of naughtiness. What I hadn’t bargained on was the union boss later ringing me up and asking me to join the cause! I had the devil of a job to convince him it was an organization I chose at random.”

Andy Partridge: “Quite early on it had been decided that Making Plans For Nigel was going to be the single. We spent five times longer messing with that song than any of my tracks. At one point I was fuming because my songs were being ignored.”

The Rembrandts, Primus and Robbie Williams all covered this.

This was covered by Nouvelle Vague, a bossa group, and included on a chillout compilation album known as Breakfast Club: Milan.

Andy Partridge told Uncut: “The things that sound like sheets of metal being struck, that’s a white noise patch on a monophonic Korg synth we had. We decided to do it with this industrial sound and glories, so it hinted that British Steel, which is where Nigel works.”