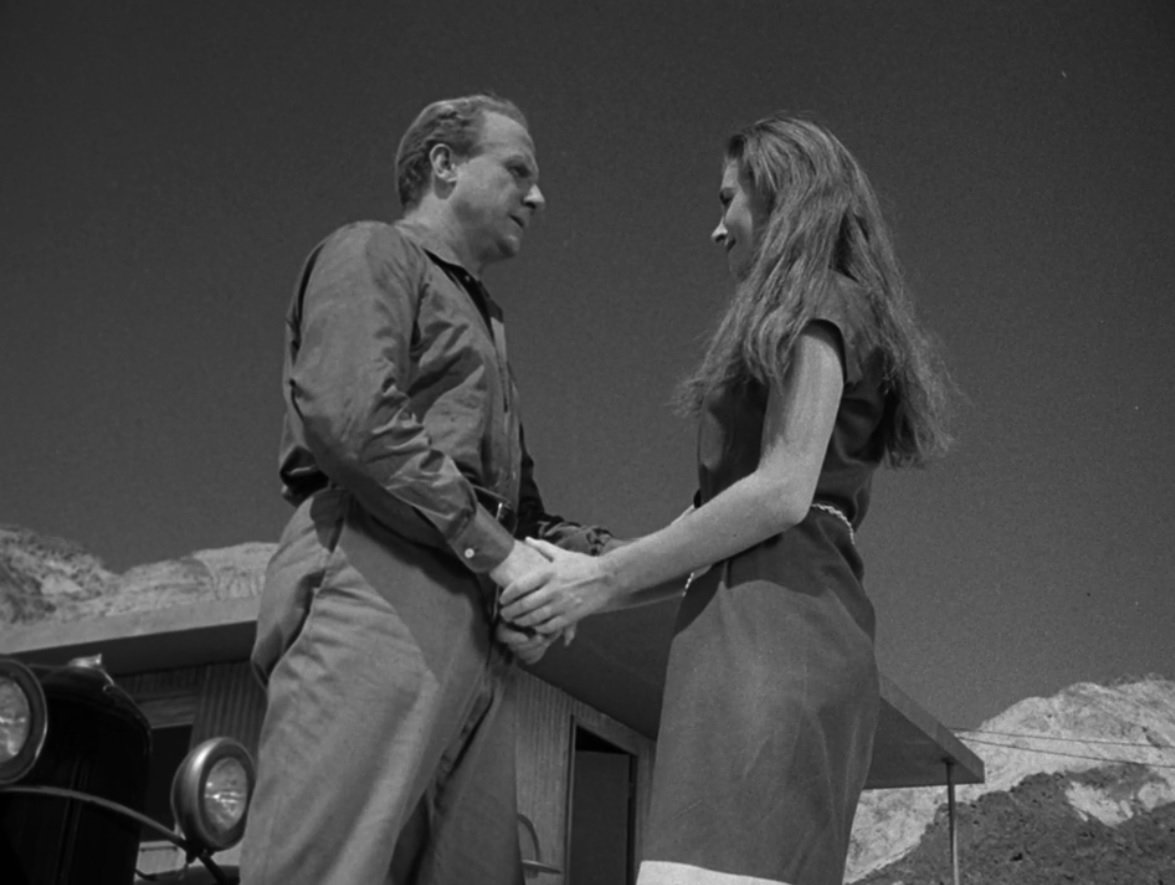 This one is an excellent episode. This one probably isn’t recognized as a classic episode but it’s great. Two great character actors John Dehner and Jack Warden are in this episode. Plus you have a future star in Ted Knight that would go on to star as Ted Baxter in the Mary Tyler Moore show.

This episode…you feel the heat and the guy’s loneliness being a prisoner on a distance barren planet. This show makes you think…about the loneliness of the prisoner and when Captain Allenby gives the Jack Warden character a big box to open… makes you wonder what constitutes a human being.

The Lonely was filmed on location in Death Valley. Unprepared for the terrible conditions they would face, the crew suffered extreme dehydration and heat exhaustion and director of photography George T. Clemens even collapsed, falling from a camera crane while filming continued.

Witness if you will, a dungeon, made out of mountains, salt flats, and sand that stretch to infinity. The dungeon has an inmate: James A. Corry. And this is his residence: a metal shack. An old touring car that squats in the sun and goes nowhere for there is nowhere to go. For the record, let it be known that James A. Corry is a convicted criminal placed in solitary confinement. Confinement in this case stretches as far as the eye can see, because this particular dungeon is on an asteroid nine million miles from the Earth. Now witness, if you will, a man’s mind and body shriveling in the sun, a man dying of loneliness.

James A. Corry’s a man sentenced to prison; 50 years solitary on a distant asteroid. After 4 and a half years, James anxiously waits for Captain Allenby and his crew who every now and then bring him supplies, and also give him someone to talk to. When Captain Allenby arrives, he brings a suprise box for James; the ultimate female robot, named Alicia that is human-like and has feelings. James initially rejects her but soon falls in love with her. On the Captain Allenby’s next visit, he informs James he’s been pardoned and will return to Earth. But the ship only has enough room for him.

On a microscopic piece of sand that floats through space is a fragment of a man’s life. Left to rust is the place he lived in and the machines he used. Without use, they will disintegrate from the wind and the sand and the years that act upon them. All of Mr. Corry’s machines, including the one made in his image, kept alive by love, but now obsolete—in The Twilight Zone.

31 thoughts on “Twilight Zone – The Lonely”